What does it mean to be a poet in 2019? It’s an art form tormented with the sense of feeling outdated in today’s entertainment climate, where people prefer blistering bass lines and menacing techno beats opposed to heading to a pub for a poetry reading. Thankfully, James Massiah is here to change that, leading the new poetry age, one that is personable, raw and in-tuned with the times. The South Londoner works through a variety of mediums. One day he performs an original piece of poetry for a member of the Royal family. That very same night you can catch him DJ-ing at a secret party buried in the depths of East London. Though a man of many talents, he doesn’t work in a Clark Kent/ Super Man dynamic. Each practice of Massiah’s informs another. In his poems you can hear him shouting about his love for So Solid Crew, turning up to funerals dressed like Neo and reminiscing about girls he has kissed along Kingsland Road.

His work also explores fluid romantic engagements, the realities of life growing up in London and the ever growing gentrification swallowing each corner of the capital. You can hear his words on his NTS Radio residency, or at his poetry readings which occur most months. Recently he performed his latest piece, Optimism 101 to a sold out crowd at the ICA. “There were a number of things that happened in my life around the end of 2018 that made me reevaluate a number of things about my view of the world and my place in it,” he tells us about the experience. “I started to think about nihilism, materialism, excess and hedonism and how it had been that I’d gotten to this point, which brought me back around to determinism, which for me in many ways is quite linked to optimism.”

Massiah wrote 101 poems for the project, and used the image of a drum machine as the artwork/ “I thought of the LCD Soundsystem track Dance Yrself Clean,” he says. “It made me think of drum machines like the Roland TR-909 or 808 and then I thought about my own philosophy of Amoral Egoism and where happiness fits in with that.” The piece originally intended to be a film screening, where Massiah started off in the nude, with each poem adding an extra item of clothing to his body, “It seemed fitting for the fact that many of the poems explored my own hedonism, expensive taste, aspiration and superfluity, I wanted to show that and to poke fun at myself, acknowledging that whilst what may have felt good at one point felt excessive now.” 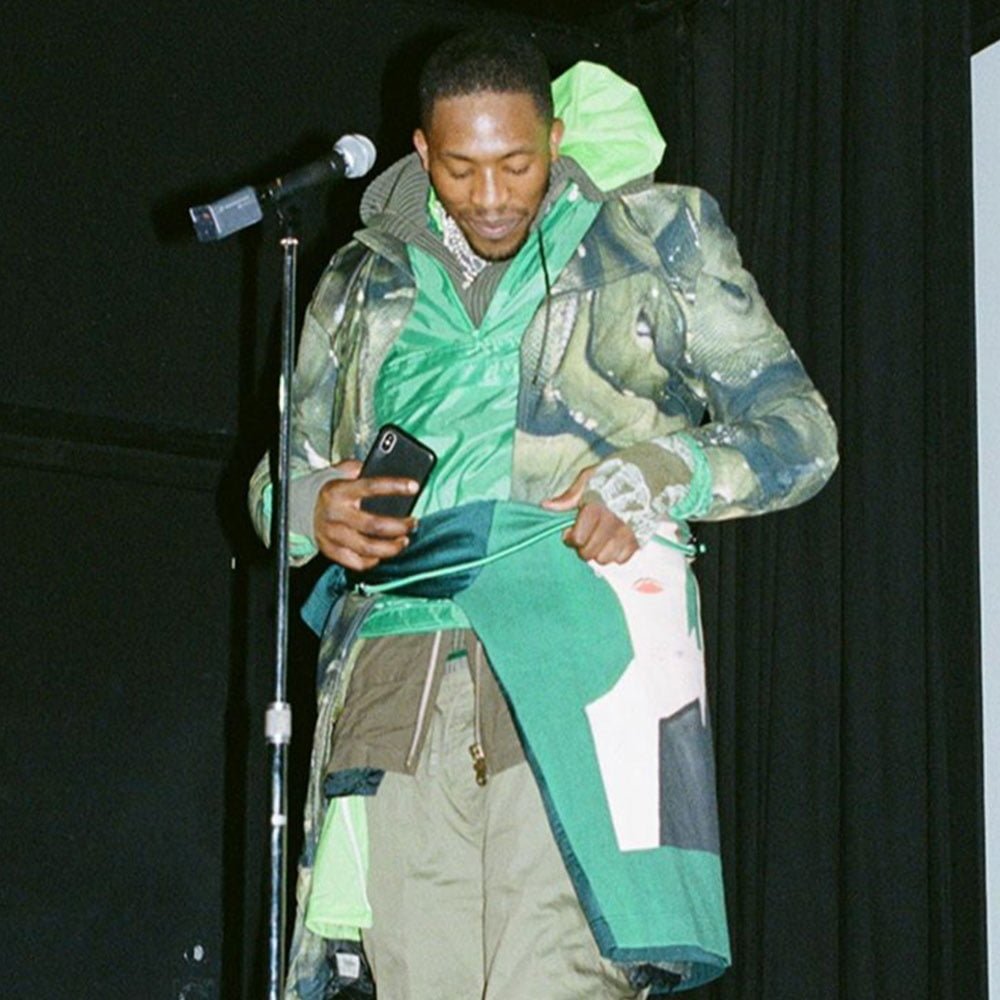 After recording the film which lasted for over three hours, Massiah decided to opt for a live performance piece instead – reading the poems and dressing in reverse, “factoring in suspense and expectation, ideas around shock and nudity and fashion to result in what finally took place at the show. I was really pleased with how it went and how it was received, I feel like, all in all, it was perhaps my best work to date and a culmination of a number of things I’ve learned as a writer, performer, host and artist over the last few years.” In light of this momentous occasion for the trailblazing poet, we caught up Massiah in order to dig a little a little deeper into his world:

Paul Toner: Out of all of the garments you wore during the Optimism 101 performance, which one was your favourite and why?

James Massiah: The Asai Takeaway Hot Wok top. I really wanted to pair it with the shiny black and green Mowalola trousers but I only picked them up the day before the show in a hasty studio visit so didn’t get to try them for size. As much as the performance was about the absurdity of life and nihilistic denial of the “rules for life,” and conventional morality it felt fine to wear the trousers around my shoulders! They added to the overall look in the end and it felt great to be wearing my friends in the show. The Asai piece I was probably wearing for the poems toward the end when I started writing shorter, punchier ones and the audience responded well to the rapid-fire section. It was also under many other layers and approaching the final nude portion of the performance, so separate to how great the piece is, it synced with an important part of the show.

PT: What was the title of the first poem you ever wrote?

JM: I couldn’t say, as I don’t remember, but I know that I started writing diary entries as part of a project at my middle school, Gorringe Park in Mitcham. I remember that I called my diary Buzz, thinking of the way the kids in Toy Story talk to their toys and me being an avid Lightyear fan it seemed appropriate.

PT: If you could pick any three people (dead or alive) to attend one of your poetry readings, who would they be?

PT: If you weren’t a poet, what would you be doing?

JM: As a determinist, I’d argue that I could never have been anything else! Even as a pure thought experiment though, it’s still hard to say – as I write I think of all the things I wanted to be and all the plausible reasons why I’m now not doing any of them. Still, I liked the idea of being a barrister at one point, a runner (short or long distance) at another, a preacher or minister and finally maybe a university lecturer. I feel like the latter is still possible, and I’m very open to the possibility.

PT: What is your most prized possession?

JM: It’s a tossup between my phone, my bike and my laptop. And my reversible Prada jacket.

JM: Depends on when and where the set is, but recently I’ve been opening with my own track “Last Dance” which starts with an echoey Acappella admonishing its listeners to dance before they die and it’s too late.

PT: Do you have any pre-show rituals?

JM: Not really.  I just get to it and try not to think too much about it or what it’ll be like. Feels best to get up and feel it out, break the fourth wall and be honest about how I feel and try to gauge what would be best remembered and chewed over by everyone in the room at the time.

PT: Where is your favourite spot to eat in London and what is your meal of choice there?

JM: The spaghetti bolognese at Cecconi’s or maybe the Red beef curry at Busaba. Or the aubergine and molasses at Morito. Or everything at Brunswick House.

PT: A late night or an early morning?

JM: Definitely a late night. Although, they’re my go to these days. Maybe it’s fair to say I value an early morning more, as it’s more of a rarity for me, but I exist more during late nights these days.

PT: What do you wear when you write?

JM: Either nothing, as my best ideas come in the shower or my uniform of black H&M jeans, black Prada shoes, black tour merch tee (probably Travis Scott related), black American Apparel sweater and (if I’m out the house) black reversible Prada jacket.

Photographs by Rosie Atkin at the ‘Optimism 101’ performance at the ICA in London. 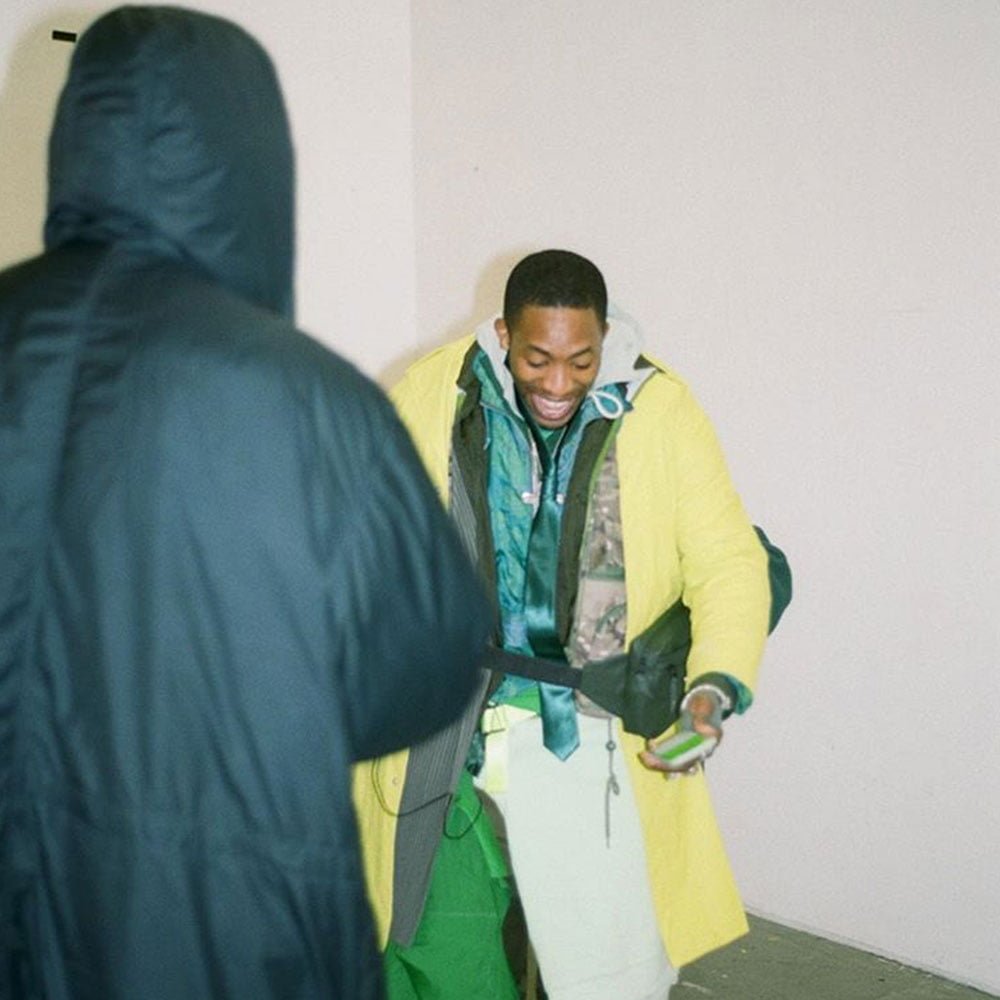 Adidas Gets The Lotta Volkova Touch With a Nostalgic Collaboration