As Playwright Jeremy O. Harris Stars In The Latest Helmut Lang Campaign, We Look Back at The Modern Evolution of the Legendary Brand

They say the past informs the present – a today shaped by key-cultural moments that have faded into the yester. When it comes to the fashions occupying the now, few hands have played a greater inspiration than those of Mr. Helmut Lang. A quick scroll through the portfolio collections that will align shop windows next season and Lang’s imprint is unmissable. Streamline rubber trench coats at Supriya Lele, utilitarian separates of A-Cold-Wall*, Alyx and Craig Green, as well as Telfar‘s asymmetrical tank tops and exposed hips and nips of Ludovic Saint Sernin. Fashion’s new guard is brimming with Lang devotees.

Such admirations come as no surprise. Near and far, this slew of emerging design talent fell in love with fashion at a key cultural moment when Helmut Lang was slashing traditions and completely 180ing perceived notions of what defines a garment as being truly luxurious. Lang was shrinking denim to super-skinny proportions before Hedi Slimane, dousing parkas in astro-metallic textures when Virgil was still at university and crafting “minimalist” and “utilitarian” silhouettes at a time such buzz-words ceased to exist in catwalk reports. From 1986 right through to his abrupt departure from the industry  in2004, Lang was stripping the ladies and gentlemen of luxury out of their couture gowns into slinky strap dresses, whilst simultaneously getting New York’s coolest kids, who previously detested bourgeoise garments, excited about owning their own Lang bondage bomber.

A man of few words, Lang left fashion behind for good without much of an explanation. The legend is that he now recedes in East Hampton, crafting sculptural artworks that have gone on to be displayed at Frieze and Sperone Westwater gallery in Manhattan. What he has left behind is an excellent back catalogue that is swept of eBay’s e-shelves for extortionate prices and a legacy of being a man of many firsts. The first to present collections in a co-ed format, Lang was also the pioneering force behind the designer x artist/photographer collaborations – a format that has come to dominate the landscape.

Though one thing Lang hasn’t left behind is a dying brand. After a slight blip in sales in the early 2010s, Helmut Lang was catapulted back into the fashion-sphere 2017 under a new industry-defining format. Dazed Editor-in-chief Isabella Burley became the brand’s first editor-in-residence, a temporary role in charge of curating a re-issued archive collection of Lang’s original designs and working alongside Shayne Oliver, who would become the brand’s first designer-in-residence. Oliver would only stay at the brand for a couple of seasons, producing only one big catwalk collection full of horny clubwear that riffed off the dress codes of underground bondage clubs – including wispy chiffon blouses, newspaper clutch bags and leather bras that doubled up as shoulder bags. 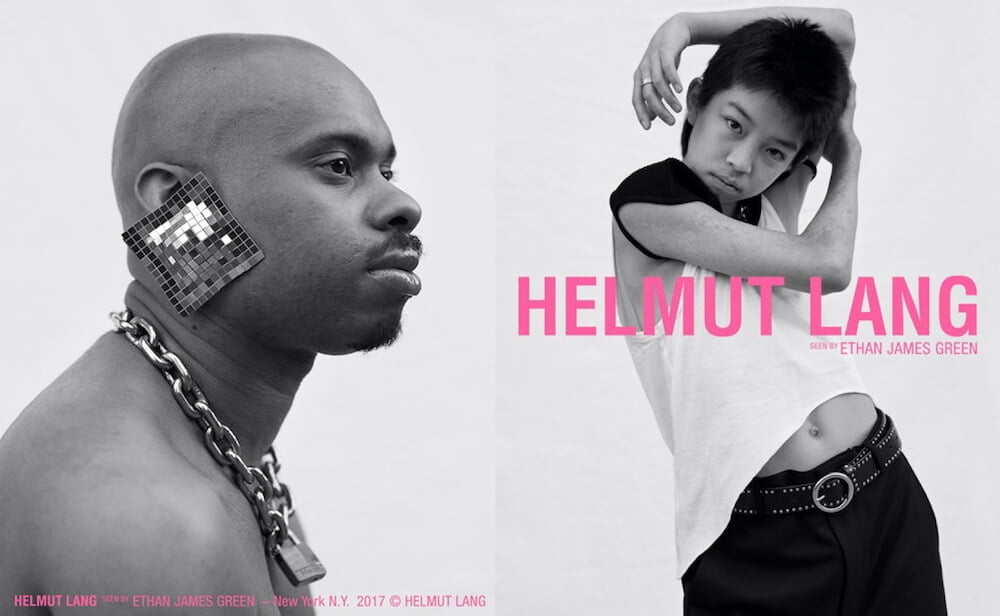 Burley revitalised the brand’s integral ode to collaboration, introducing the Helmut Lang The Artist series, where the likes of Walter Pfeiffer, Ethan James Green, Keizo Kitajima and Exactitudes each lensed their own distinct campaigns for the brand. Such ethos was maintained by Alix Browne, the founding editor of V Magazine, who took the helm following Burley’s departure. The most notable outings under Browne include a series celebrating cab drivers across the globe, a pink-hoodie collaboration with Turner Prize-winner Jeremy Deller, a rather-red capsule collection inspired ginger folk and an array of t-shirts, pins and posters using highlights from Adrienne Salinger’s photo-series of teens in their bedrooms. Browne was able to transfer Helmut Lang from the cool streets of Manhattan to uncharted territories, including the Merthyr Tydfil, a small town in the Welsh valleys, where a gaggle of local grannies starred in the brand’s AW18 campaign. 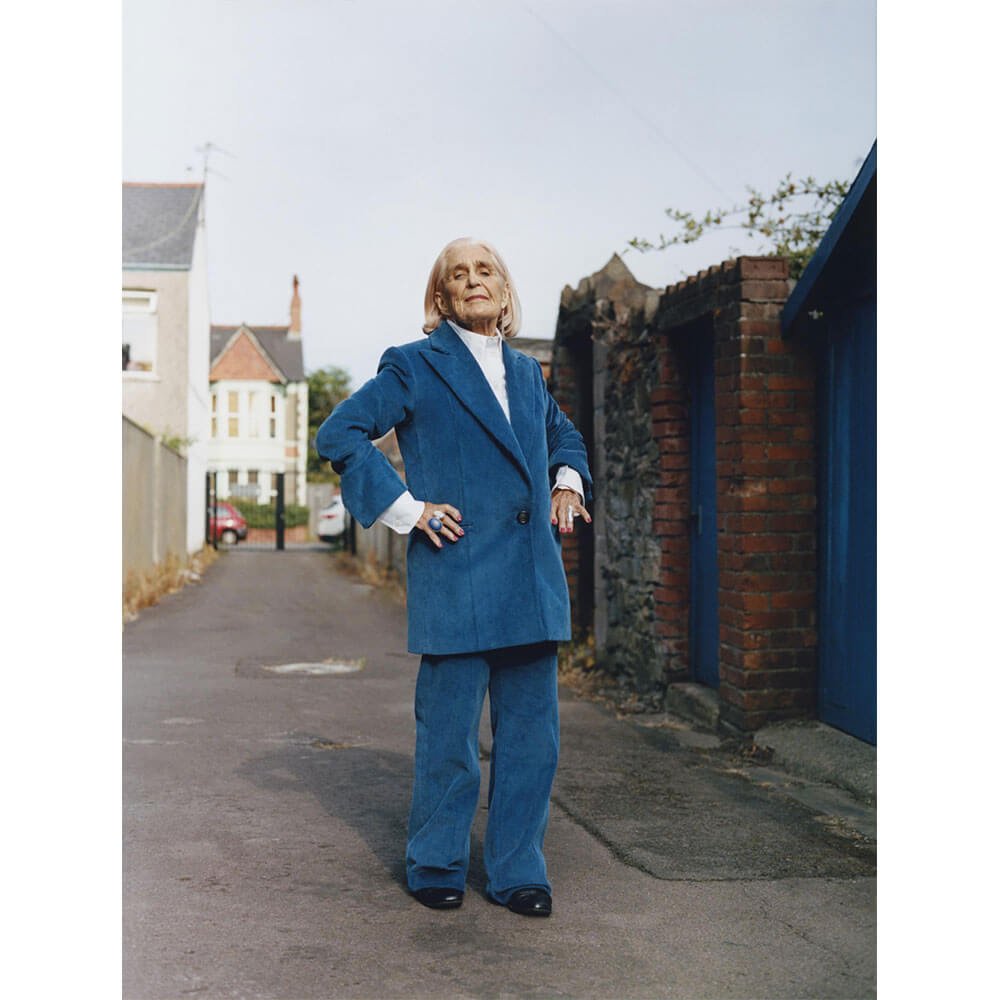 The Helmut Lang of today recedes in the more traditional brand format, with designer Thomas Cawson putting the pedal to the metal without an editor-in-residence. Cawson, who have previously had stints working at Givenchy, Neil Barrett and Calvin Klien Jeans under Raf Simons, is re-molding traditional Lang codes and silhouettes. Cawson, alongside former partner Mark Thomas cut their teeth by pastiching the Lang paint stripe which first made an appearance on an army parka debuted in 1997, creating white belts that clung onto denim twin-sets for AW19. In the same collection, the opaque chiffon maximised by Shayne Oliver was transferred to formal shirting, whilst the astro-metallic textures popularised by a Lang moto jacket from 1999 were made even shinier; splashing suit pants and strappy stilettos.

Cawson and Thomas’ sophmore outing was even stronger than their first. Again ploughing through metallic, sheer and leather staples, the pair introduced a chorus of army-green outerwear, acidic-hued separates and louche, putty-brown suiting. The latest outing from Cawson is a capsule of paint-splattered t-shirts, hoodies and joggers, paying direct homage to the iconic paint-splattered jeans that first appeared on the Helmut Lang catwalk back in SS98. Not one to ever miss out on a cracking campaign, the brand brought along songstress Tei-Shi, the cast of his Slave Play, and its playwright, Jeremy O. Harris, to douse a collection of props by Kadu Lennox in the hues of the American Flag. Geographically, it’s miles away from the model Lang popularised back in the 1990s, yet it still feels in-tune with the brand through-and-through. Whether Cawson wants to take the brand more into this abstract direction or stick to what he knows, one thing’s for sure – Helmut Lang have still got it.

The Helmut Lang ‘Paint Splatter’ collection is available online and in select stores. 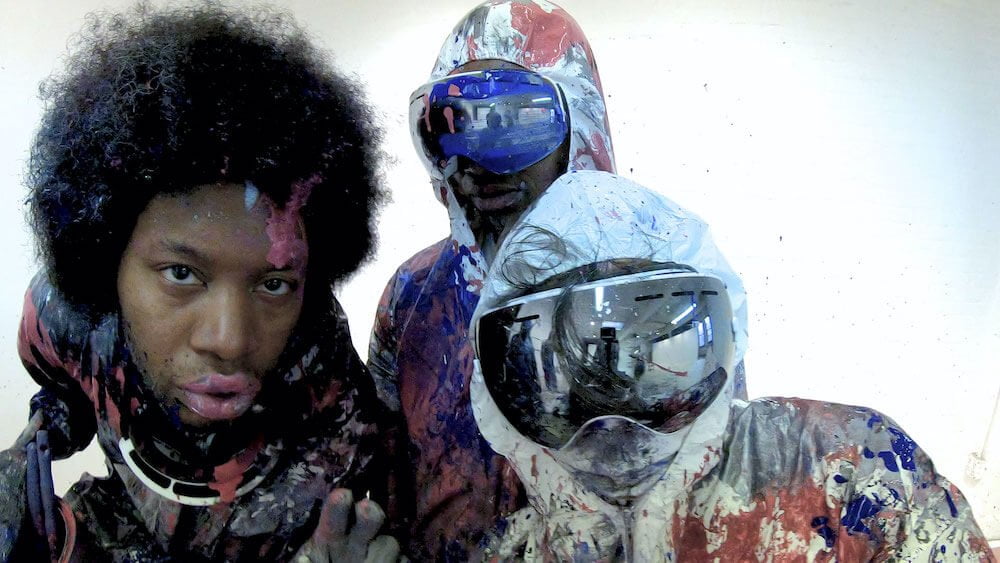 Jeremy O.Harris along with the cast of ‘Slave Play’ and Tei-Shi star in the Paint Splatter campaign

Helmut Lang Have Teamed Up With Exactitudes (And Kanye And Solange)

The Instagram Archive Accounts You Need To Be Following

The Root Cause: Susie Lau on Identity, Activism and Finding a Voice