“Dodgy.” A description more fitting for the house facing yours whose residents never open the blinds rather than depicting visual cues of a young designer. While most wouldn’t be too thrilled with that connotation, it was that exact label given to him by tutor Julie Verhoeven that made Central Saint Martins graduate Gerrit Jacob understand his own outlook.

Jacob’s graduate collection kick-started the CSM MA catwalk, held at London Fashion week this past February. It was a brazen show opener, with a mob of reference points that bulldozed into one another, appearing thoroughly refined and within one cohesive vision on the catwalk. “The central themes [to my work] are always an exploration based around class-based tastes and identities as well as themes of bleak suburbia and youth.” he explains to us.

Hailing from Hamburg, Jacob has been enrolled at Uni since 2011, studying womenswear right up until the halfway mark of his MA degree. “To me the relationship between myself and the male body is obviously a much more intimate one,” he says. “I think that any proposition between me and that body feels a lot more genuine and, quite frankly, stronger. I probably always made clothes that belonged on men, whether I knew it at the time or not.”

Underwritten with teenage angst, Jacob’s graduate collection toys with hormonal aggression without the sense of appearing overtly virile. A stiff vinyl coat with billowing sleeves and a sturdy collar is spliced straight down the spine, quickly followed by a Transformers-like shirt that swallows the model’s slender frame. The look is worn with cargo trousers constructed out of yellow raincoat fabric, complimented with a flocked “soft boy key chain” and fingerless satin gloves which look part Dennis the Menace, part Avril Lavigne back when she was lusting over skater boys.

Each look on its own appears as bullish with a twinge of camp. A jangled, cropped shirt and clip-on tie, is constructed from a concoction of scraggy old jumpers, chopped and dyed a washed-out mint hue, commands a second look. As does the “corset thermal” long sleeve shirt with bra cups reinterpreted as elbow pads, worn with slim fit salmon pink trousers and velvet boxing boots created in partnership with Roker. 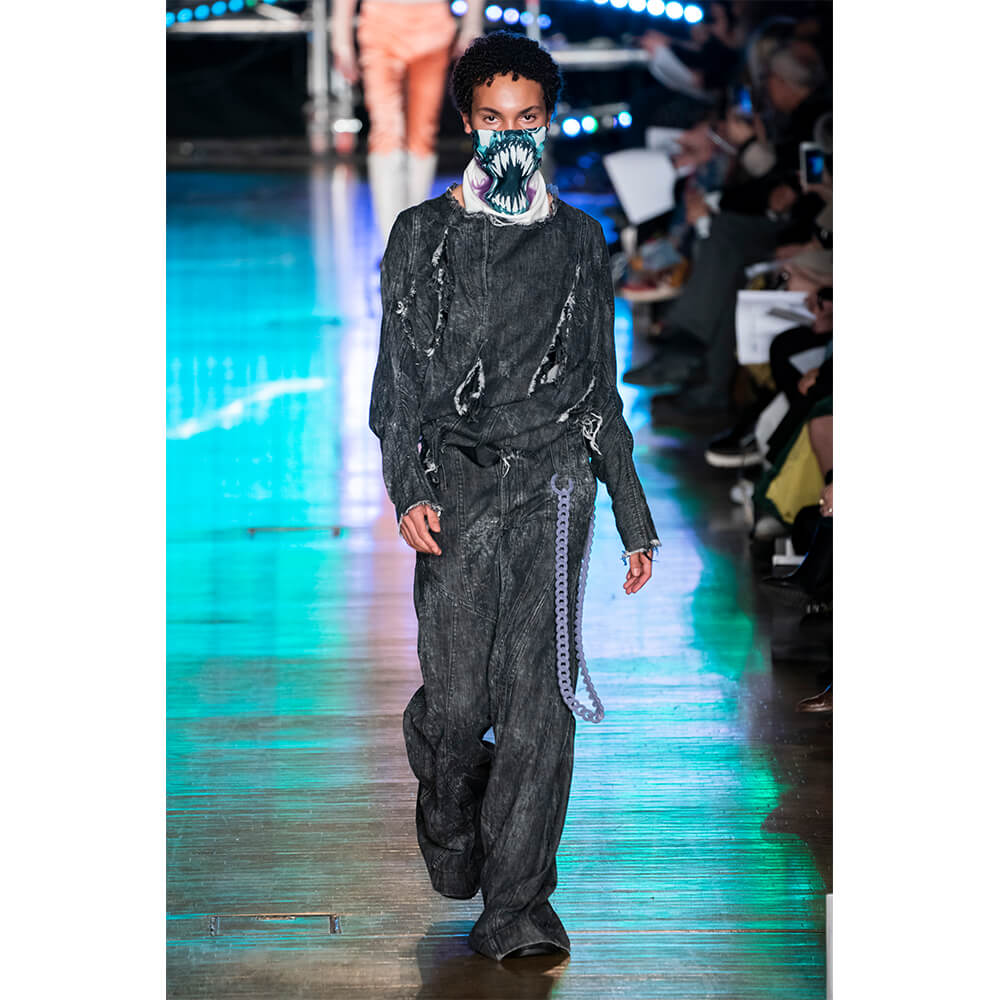 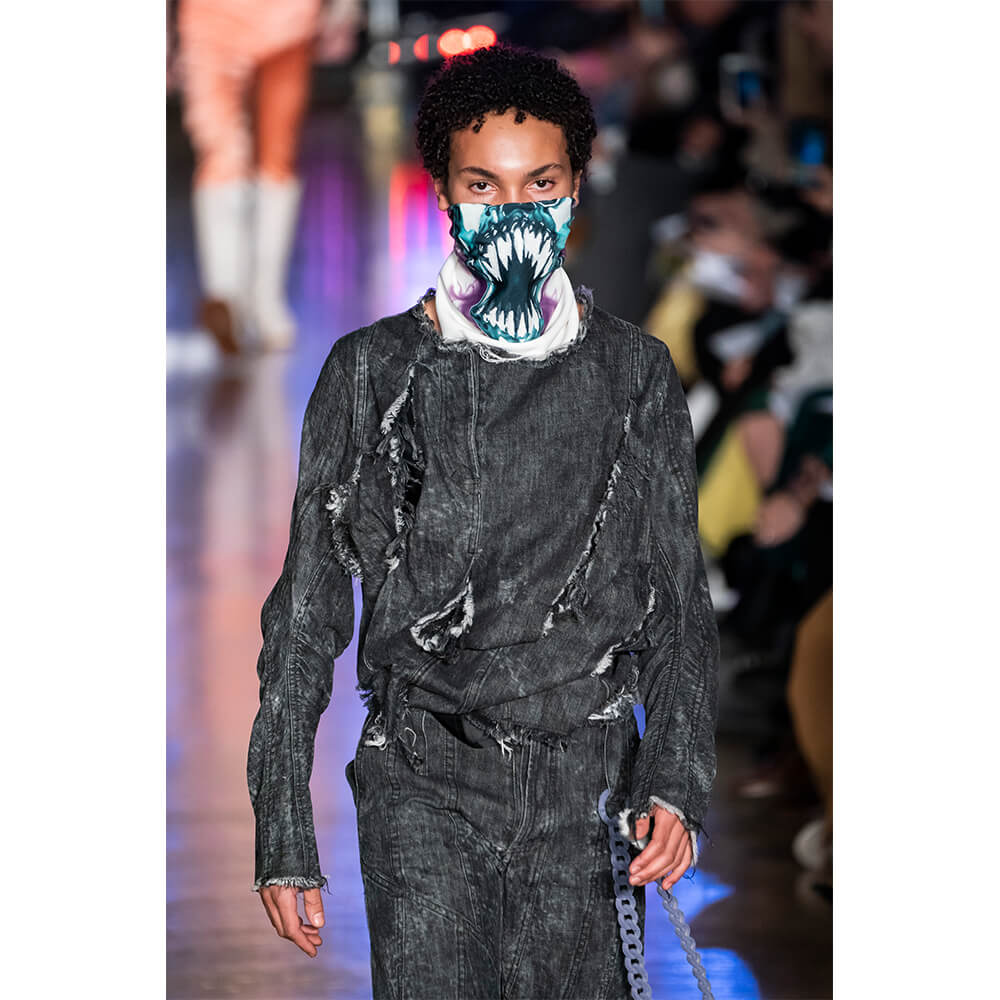 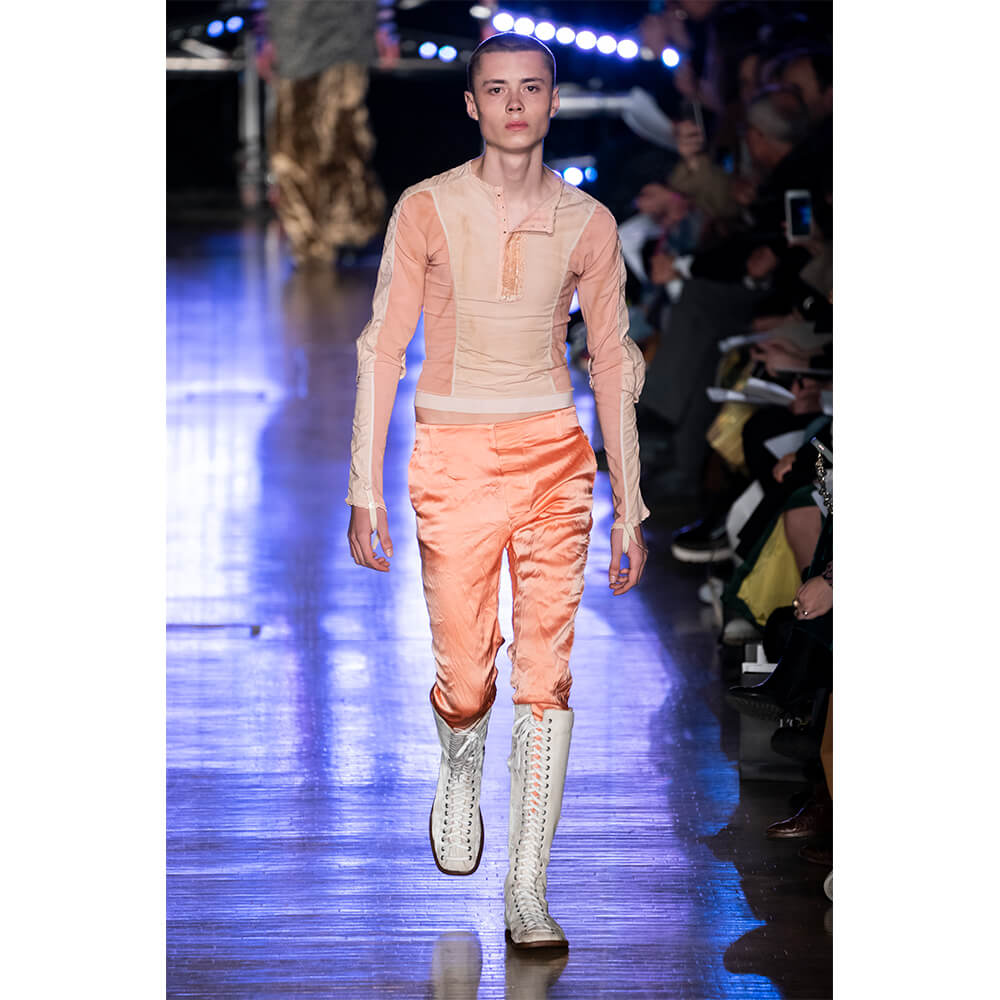 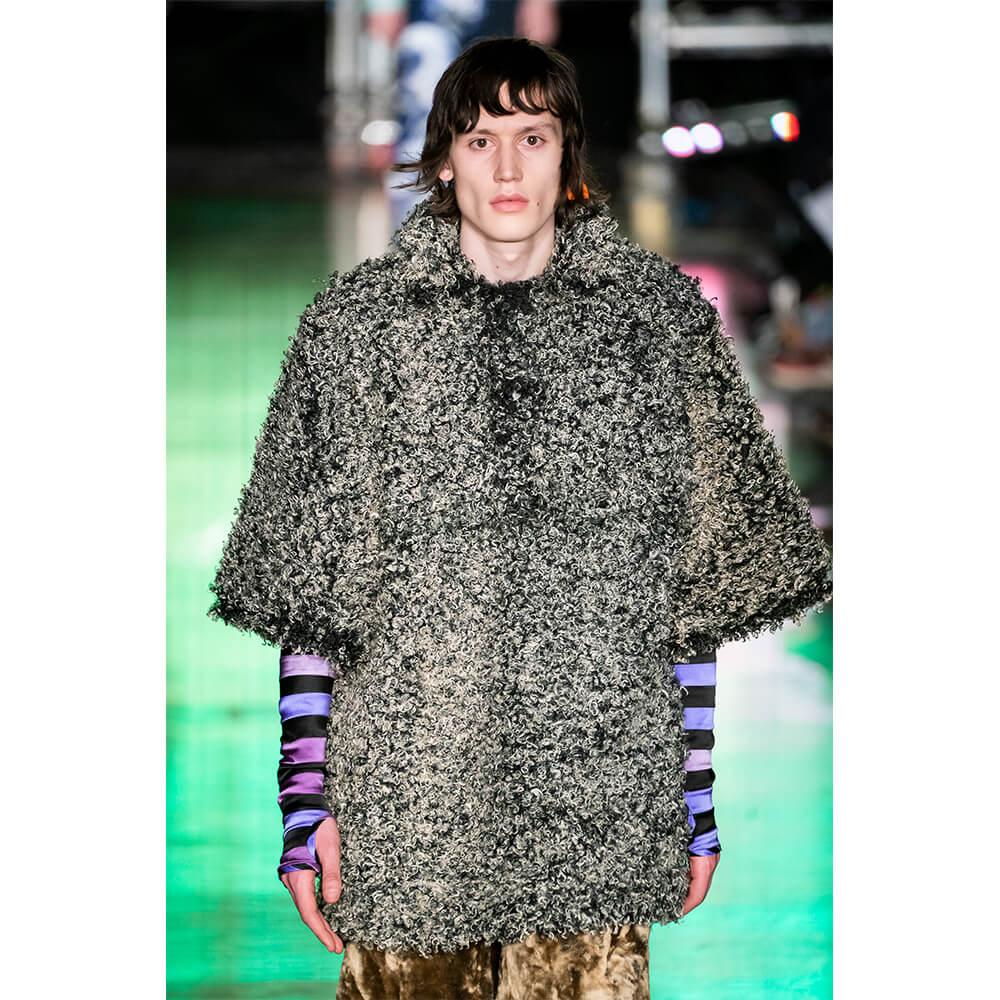 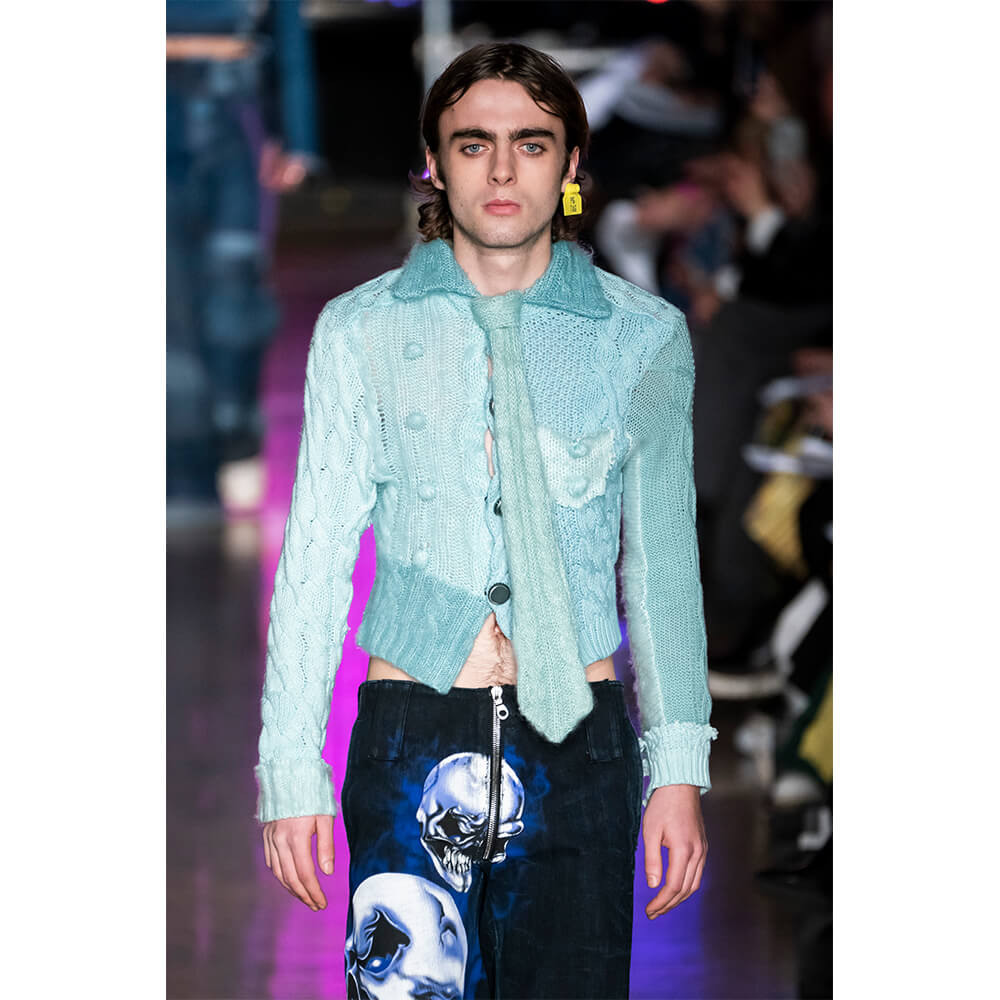 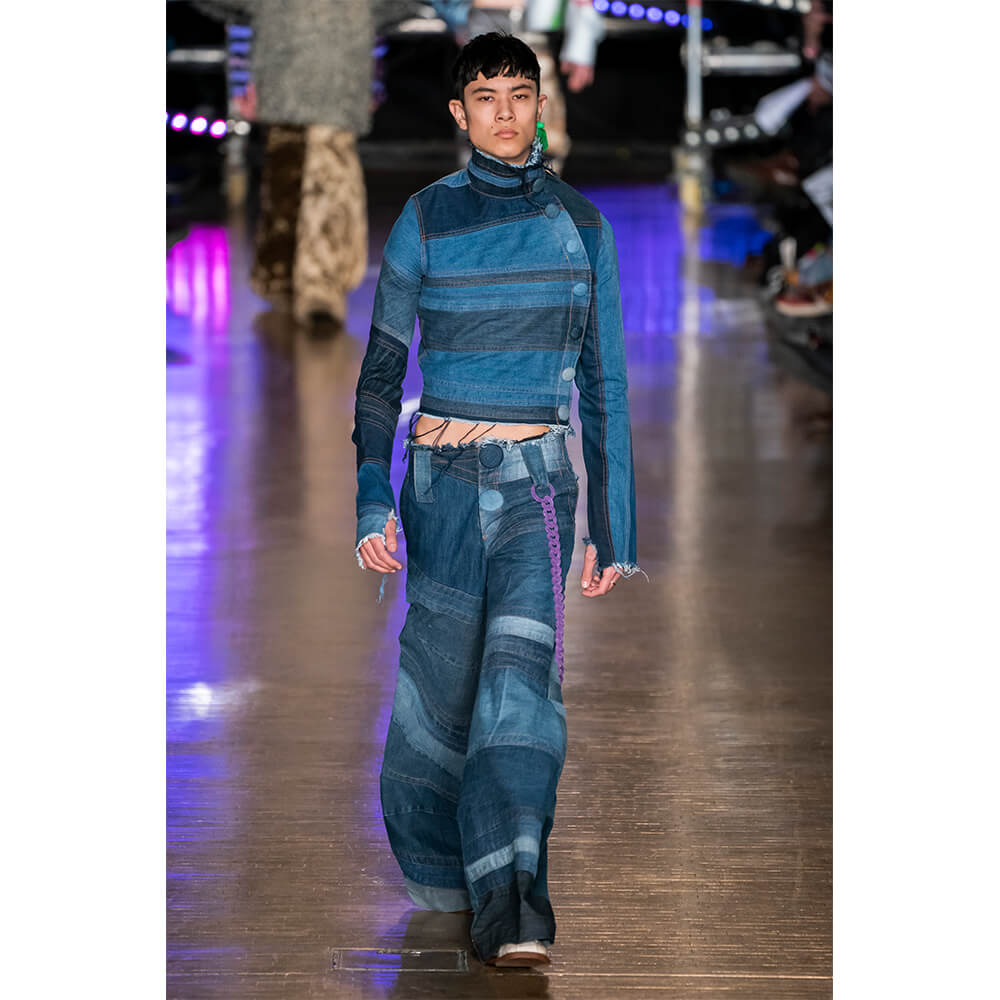 “Whenever there was something I wanted to do that I wasn’t the best at, whether it’s printing, airbrushing or knitting, I work with someone who I think is amazing at it,” Jacob shares. “I think sometimes there is the quite toxic notion of the ‘designer who does it all’, the all-encompassing genius that stitches, cuts, drapes and can teach themselves anything. I have heavy hands and no motor skills, plus I really enjoy the process of working with friends.”

The collection also draws from the airbrushed graphics that plaster the pop-up summer fairs, that as a child, you aimlessly longed for all year round for. The one in particular that stuck with Jacob was Dom in Hamburg, where his dad would take him as a treat – “the final look was actually airbrushed by a funfair artist,” he explains. That’s a fitting base then, as Jacob’s work feels like the equivalent of a one too many rides on the waltzes – once you get off, not everything makes sense at a first glance, yet still, it isn’t half fun. Jacob’s vision for his emerging brand is multi-layered and a tad all over the place, but that’s the appeal. From earrings that look like pig tags, to teddy-bear mohair polo’s and wide-legged jeans emblazoned with menacing skulls – the Gerrit Jacob man is yet to find his style tribe, borrowing bits and bobs from whatever he deems cool enough. 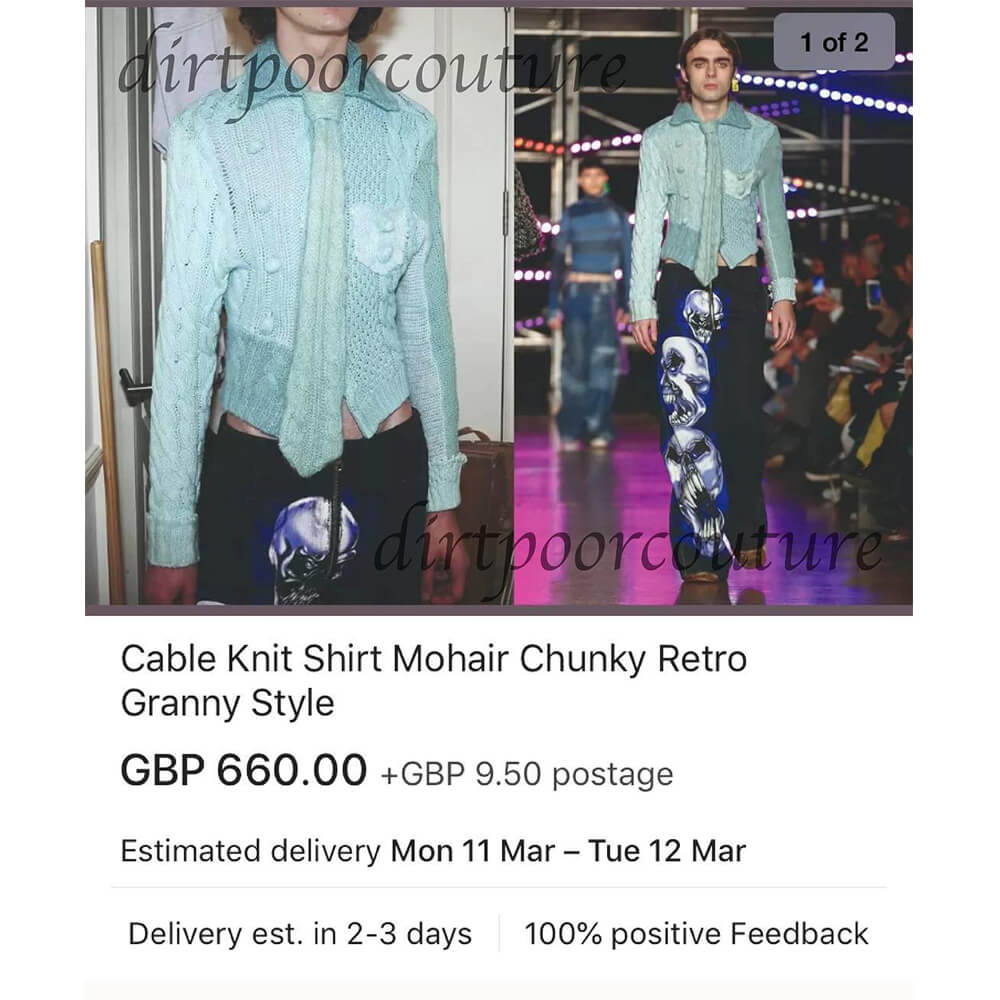 Such skull motifs along with cartoon tigers that appeared on bandanas, sketched by fellow CSM student Pierre-Louis Auvray, were immortalised in the world’s first mixed reality catwalk in partnership with Three. “To me the visual context and the surroundings of the boys in the clothes are always very very important so to have the opportunity to have that become three-dimensional was really quite extraordinary,” Jacobs explains. “Doing the mixed reality runway took a lot of planning & preparation so while I very much enjoyed that process I felt that after this high-budget super-produced show it made sense to go in an entirely opposite direction.”

Shot by Aidan Zamiri, Jacob’s collection has now been webbified in an eBay inspired look book with captions reading Chunky Retro Granny Style, Cool Trendy XXL Tokyo Sci-fi Shirt and Dirty Poor Couture. “It was a lot about putting the clothes back to where they came from and where they would exist if they were to exist in peoples lives,” he says. “Half of my research came from eBay so it only felt natural to put the collection back into that context.”

When it comes to graduate collections, there’s a tendency to aim to raise as many eyebrows as possible – and not for all the right reasons. Jacob’s vision so far is a distinct one, unique to him. His work is off-the-cut. Witty yet threaded with a strong sense of nostalgia – like the 5D skulls that flew above his MA collection, Gerrit Jacob is set to soar.

10 Minutes with Reese Cooper, The 21-Year-Old Taking The Menswear World by (Retail) Storm

10 Questions with Bicep, Ahead of the Duo’s Global Stream from the Saatchi Gallery

Pucker Up, Chanel Has a New Lipscanner App