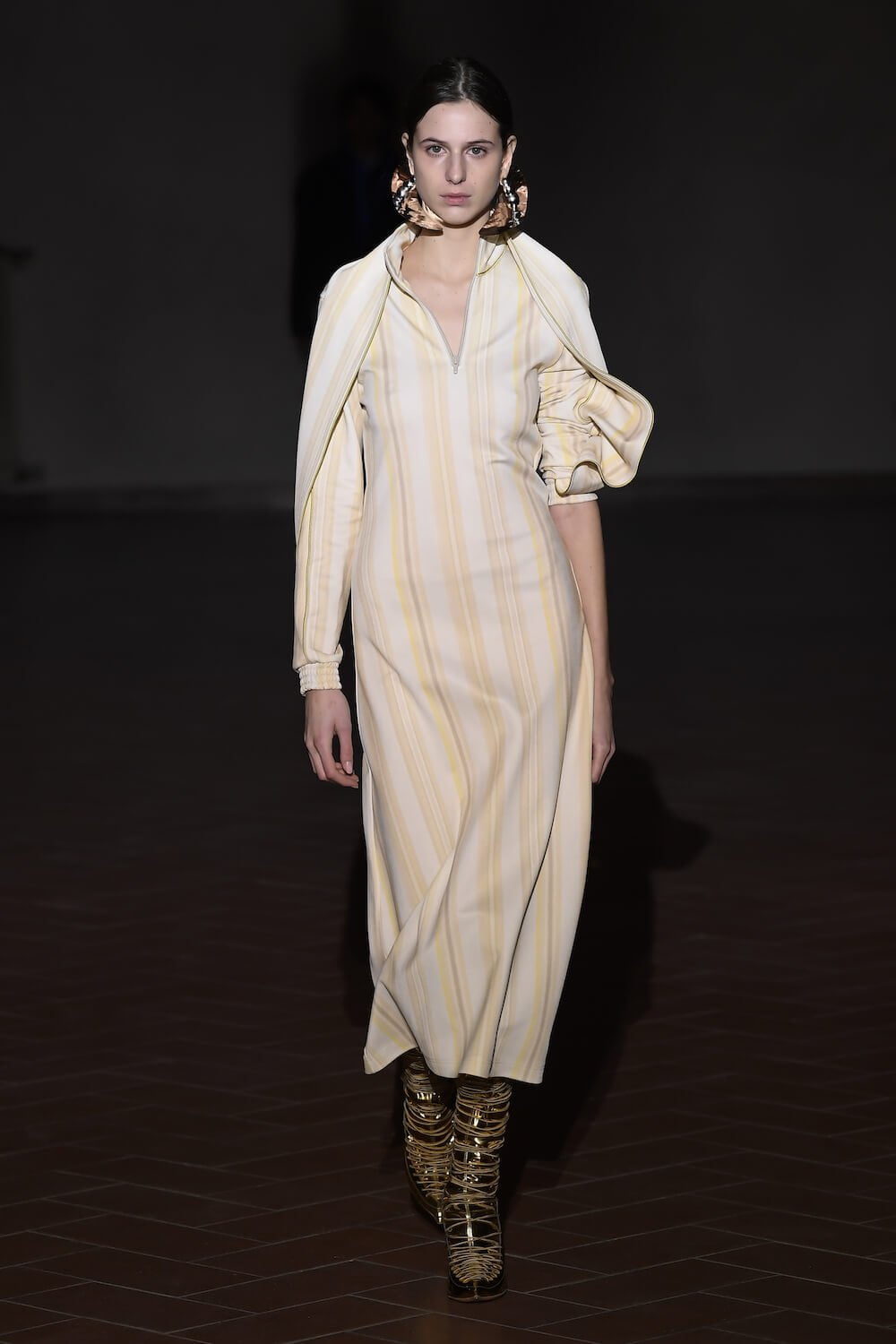 “…are delighted to invite you to the AW19 Pitti special guest show of Y/Project”. It was, said insiders, going to be “something quite special – wrap up warm.” In the Chiostro Grande del Complesso, the huge centre square, deep within the walls of the 15th-Century Santa Maria Novella church in the centre of Florence, the world’s fashion press and buyers congregated to see designer Glenn Martens autumn 19 collection. Armed with mini torches, press and buyers made their way through the dark passages and courtyards of the church to take their seats around a huge square. A beating drum grew faster and the models walked by in the dark. All shone their torches on the garments. Seams looked like guide lines which took your around the clothes. Instead of things to hide they emphasised the remarkable cuts: strange! And shapes: Hunched! Large and “dropped” and boxy: a pair of jeans looked “fat”; a permanent crease down the front of ciré trouser looked sinister. The denim grew weirder. There was sinister net worn over an abstract and patterned knit. ‘70s-ish, maybe ‘90s.

None of it was “right” and it certainly wasn’t easy. But that’s not the point because Y/Project is like licking a battery: there’s a jolt to these clothes. But Y/Project people want that, know that- they don’t want everyday. That’s for other designers and dressers. They’re the “new alternatives” a aesthetic rooted in contemporary fashion not music. They’re self-styling: something Martens achieves with poppers and fastenings and pull-cords, which alter the way the garment appears on you. By you. You can take Martens’ vision or make it more extreme. A flap opens here, and a bit more; the pull-cords release and the trousers are really wide now. Then within the collection there are some very “normal” pieces, too. For normal read a fair isle knit with tiny knife slashes which revealed a pinky red fabric underneath. Sinister. A double-layered leather jacket looked like something you’d walk the dog in. In a film about weirdos in the early 1980s who walk their dog: it just wasn’t right. It was that bit-too-big on the shoulder and “hunched” again. The knitwear was particularly strong: a white mohair crew neck came with some kind of abstracted pattern on the chest. At a guess, and with the help of our handheld mini torches, it was a paisley print magnified. Or a field mouse. Maybe. Or both. That was great.

Over the past few seasons Martens has honed his aesthetic. The work is as technically intimidating as always – he experiments – but this season felt more “at ease”, more cohesive. He showed men’s and women’s together, and it came with a whole lot of energy. And something’s working: at last count there were 150+ stockists of his collection in stores around the world. And now as guest designer at Pitti, the former finalist for the LVMH Prize and ANDAM Award winner, is opening up the brand whole raft of potential new retailers – everybody is in town this week.