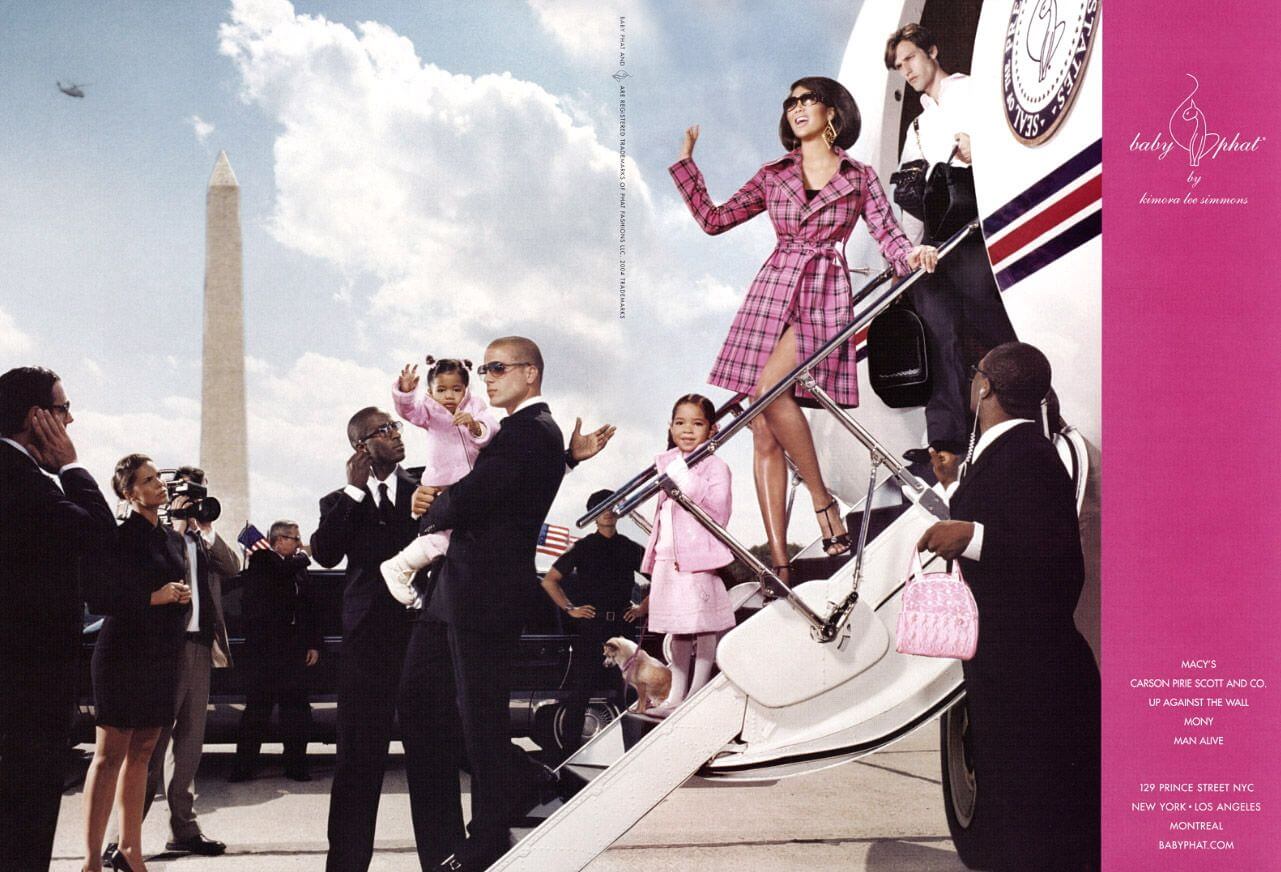 Before House of Dereon, and before Paris and Nicole rocked their Juicy sweats, it was the Baby Phat sphinx that stood for millennial dreams. The who’s who of celebrity culture trotted around with booties adorned by gold plating and a diamanté feline. So, you can understand the sky-high levels of excitement as we heard, through Kimora Lee Simmons’ own Instagram, that the cult brand is coming back. Hold onto your wigs ladies and gentlemen – this groundhog day is just beginning.

The early noughties were quite something… Britney shaved her head, Mischa Barton and Lindsay Lohan both got a DUI, Jamie Lynn Spears just announced her teenage pregnancy… Amidst all that madness, VH1, MTV and E! joined arms in creating this weird new invention called reality TV. Our first insight into the tumultuous lives of celebrities and the dawning of the age of a new kind of socialite. This was the time when the Kardashians were extras in the lives of A-listers, and the grande dame of extravagant living granted us access into fashion’s first family. Kimora: Life in the Fab Lane ran for four years, following Kimora Lee Simmons as she navigated her life as a model, mother and business owner. The show also featured Ming and Aoki Lee, her adorable daughters and baby catwalk regulars.

The fabulosity of it all – painfully pink and dripping in designer labels, accessorised with dramatic breakdowns and makeups, coupled with that LA filter only E! network can achieve. You know, that bubblegum and shimmer that’s since become synonymous with their rich opus of real-life dramas. With discourse surrounding race and fashion, body diversity, straddling carrier and womanhood, the chaos was rooted in a nuanced divulgence into social issues that remain timely until today.

Kimora’s cult brand Baby Phat was the pioneer of streetwear on the fashion weeks’ bill. With hip hop roots, she amalgamated her cultural background by implementing it at the core of her business model. With clear iterations of her half-black, half-Asian heritage, Kimora was set to change the landscape of urban fashion as a firm competitor in the luxury market. This was a time where high-end designer houses were hesitant to extend their support to the hip-hop community and look at diversity as an oil stain on the conscience of fashion folk, both on and off the runway. The lens was on the insiders to calve their lane on the fashion front. Along came Baby Phat, one of the most nostalgic brands of the 21st century. 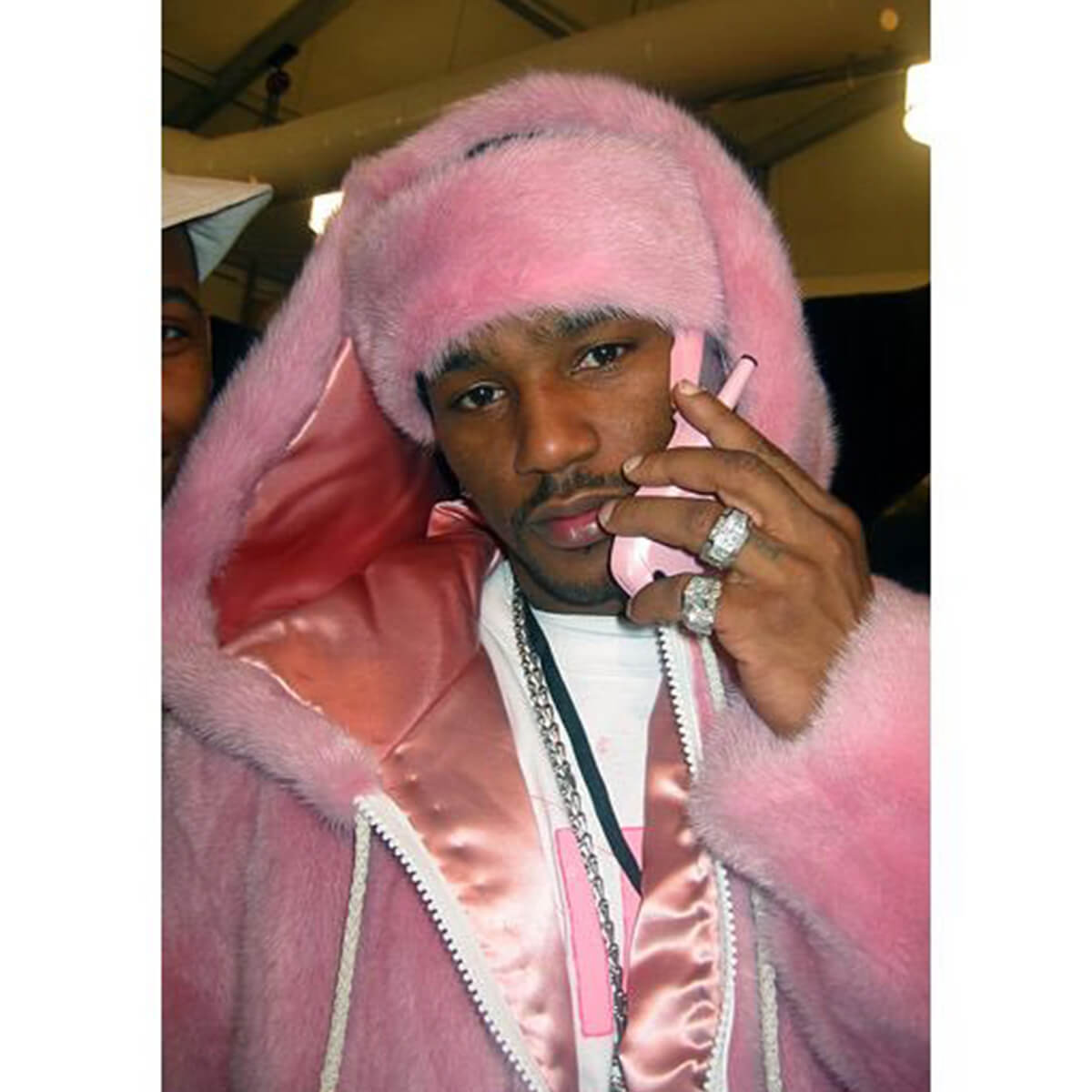 In 2003, Baby Phat’s first New York Fashion Week show saw the inception of one of the most recognisable imageries in contemporary pop culture. Killer Cam (of Dipset fame) is pictured leaving the Baby Phat show in a custom pink hooded fur outfit completed with a matching headband and an equally pink flip phone. Many have tried recreating the look since, only few have succeeded. The juxtaposition between his hyper-masculine nature and the soft, feminine sensibility of his look paved the way for a revaluation of gender conformity and precedence on how black men self-identify through clothing.

Lil Kim is arguably one of the most successful and visually recognisable figures in hip-hop. The rap arena was (and still is) male-dominated, and having a figure like Kim occupying that space by reaffirming her femininity and sexuality stood as a clear F-you to the system. Yes, her aesthetic was largely built on the back of feminist consciousness, but Kim was very much a black girl from Bed-Stuy, the epitome of ghetto fab. Stylistically black – the hair, the makeup, the nails and her fly outfits were all elevated ideas of a typical black girl’s uniform. Kim’s appreciation for fashion was the reason why she quickly became Kimora’s muse – both from similar backgrounds with a penchant for Cristal and floor-length minks. Lil Kim was the embodiment of the Baby Phat ethos. 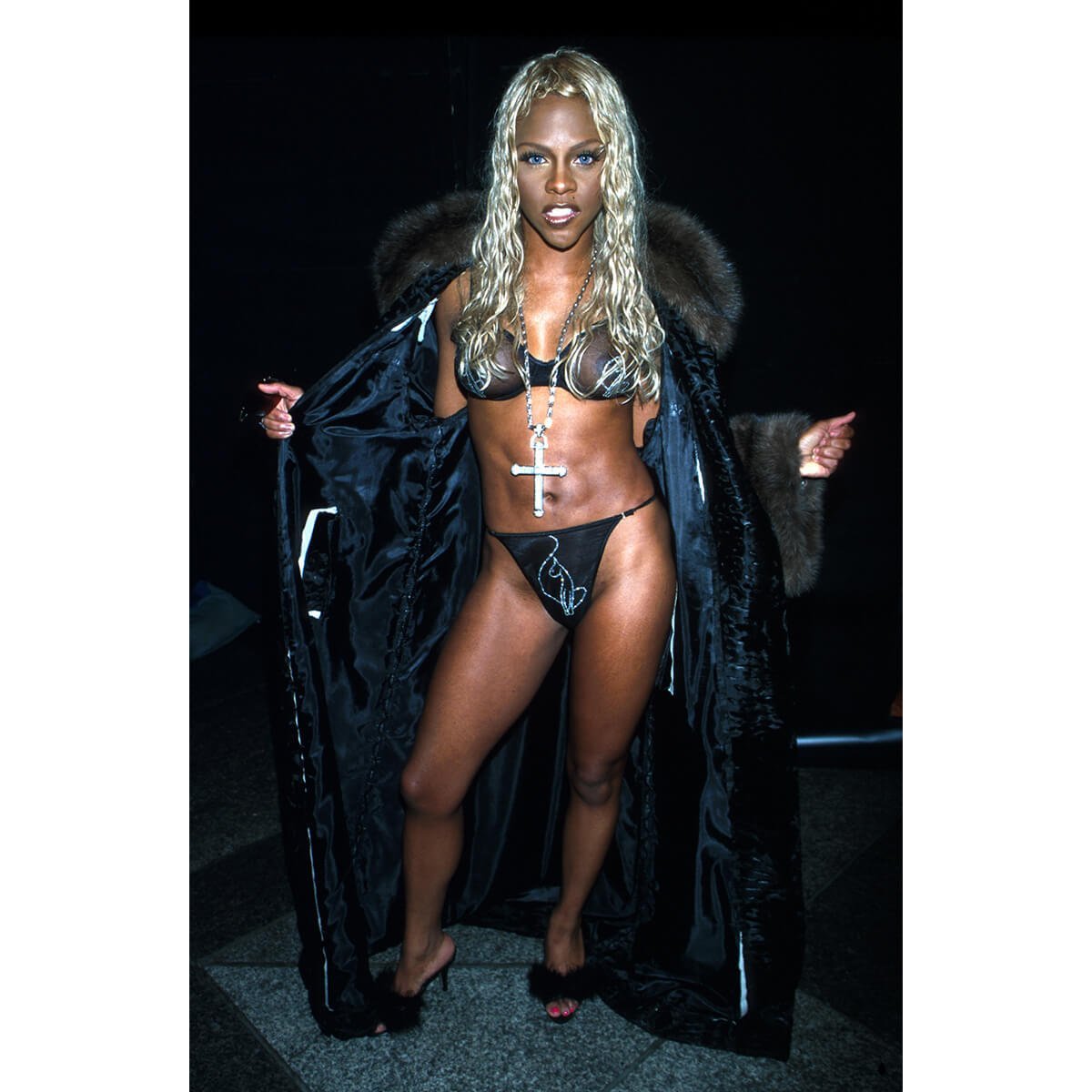 In 2004 Kimora Lee Simmons became a tech giant. She collaborated with Motorola on designing a limited edition of Motorola i833. Picture Elle Woods – baby pink, 0.4-carat diamonds and Chanel-esque quilting. That’s the work of a marketing queen. How can you market a Kimora flip in a sea of competitors? By making it unapologetically and completely ridiculously *fashion*. The phone came complete with some major accessories: a quilted pouch and dangles. The advertising read: “the new limited edition Baby Phat i833 phone by Motorola is actually like a piece of jewellery — bold, fun, sexy, and chic.” Two years later, Kimora became the first ever designer to host a show at Radio City Music Hall as well as one of the first ever to ever lifestream a fashion show online.

In 2004, Kimora’ ex-husband and business partner Russel Simmons decided to sell phat fashions to retail giant Kellwood in 2004, Kimora remained at the helm with creative control of all apparel. But it didn’t take long until Kellwood dissolved as a result of corporate changes and sadly Phat fashions and Kimora departed aways in 2010. But that was then and this is now.

After a 9-year licensing hunt, the brand is back with its rightful owner. According to Miss Kimora, the label will launch in the spring with a “mainstream sportswear” identity. Staying true to its mid-tier retail positioning, the designer aims not to only evolve with the times, but hark back to her “amazing personal archive,” enticing both newer and original Baby Phat lovers. Her two (now teenage) daughters were the inspiration behind the revival as she recognised the Gen Y’s need for messaging. “It’s perfect timing for this,” she says. And we absolutely agree. Waistcoat and peddle pushers. Calf length stiletto booties. G-strings with the sphinx resting above one’s hip hugging bell-bottoms. In the words of Kimora Lee herself: “guess who’s bizaack…” 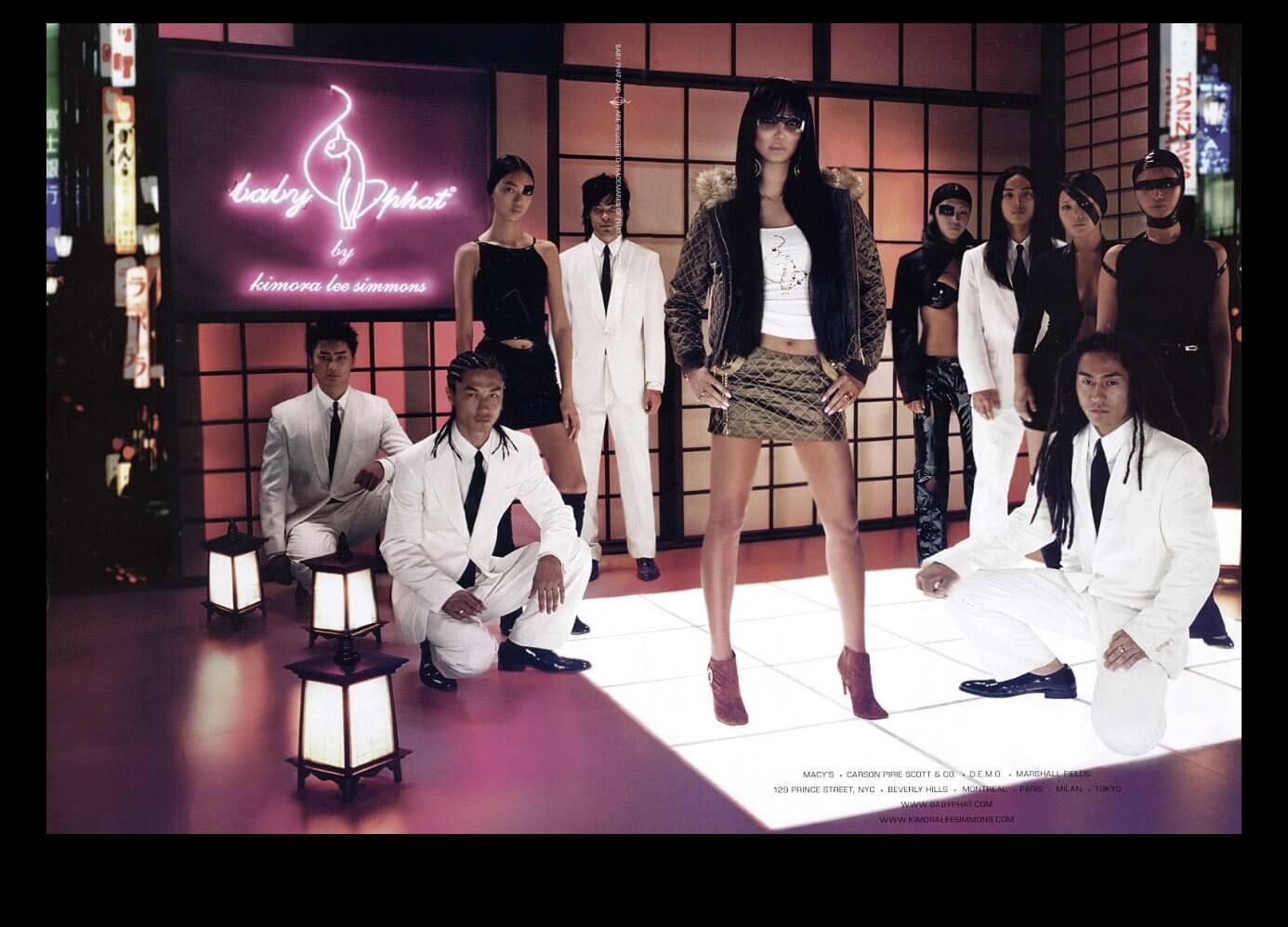 As Adwoa Aboah Gets Her Own Barbie, We Bring You 10 of The Most Fabulous Celeb Dolls

Hood By Air Are Back, Here’s Why You Should Be Excited

As Rihanna’s New LVMH-backed Brand Finally Gets a Name, We Remember 10 of Her Fashion Moments That Made Us Go Loud

Step Back Into the 1980s With Dunhill’s New Film