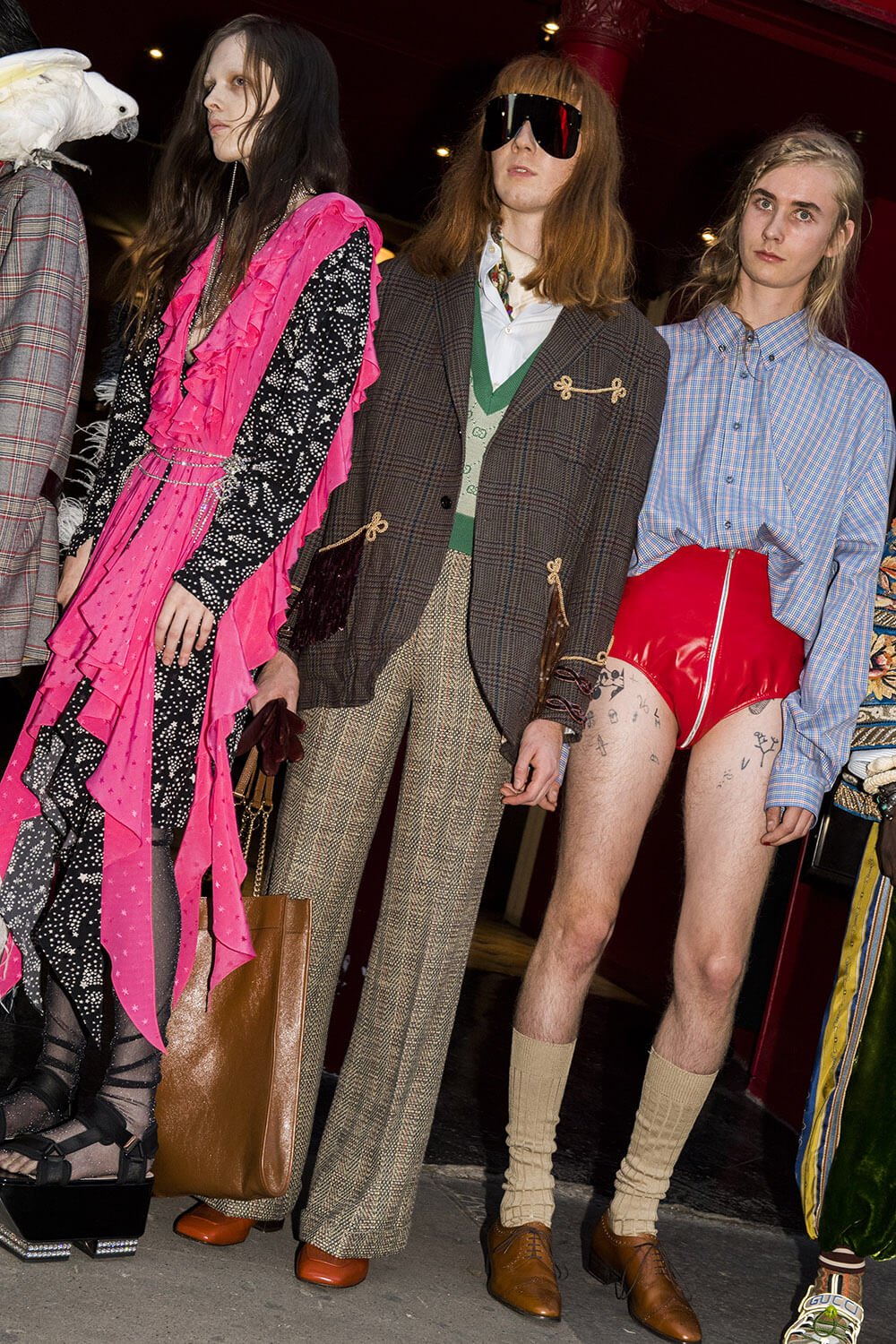 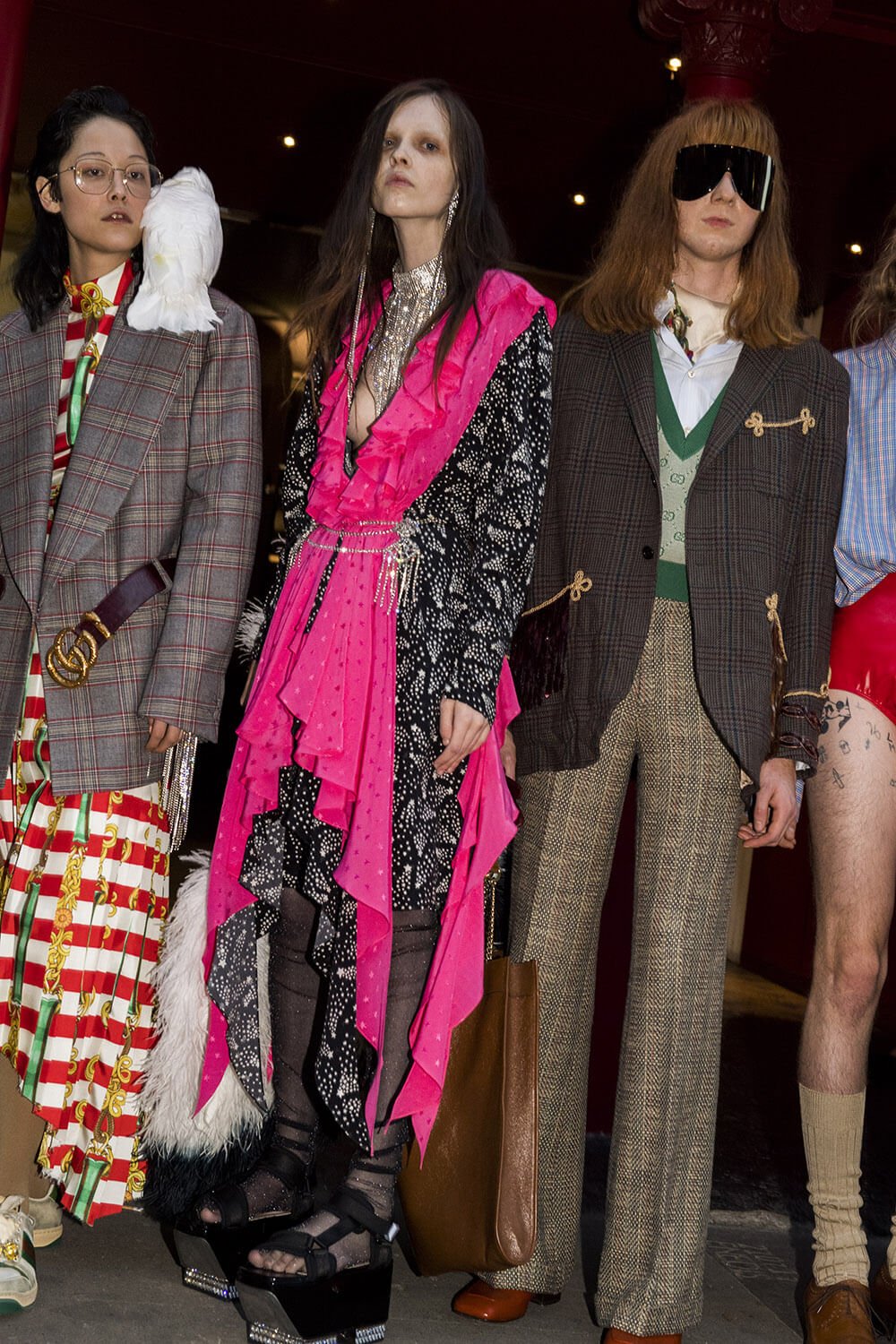 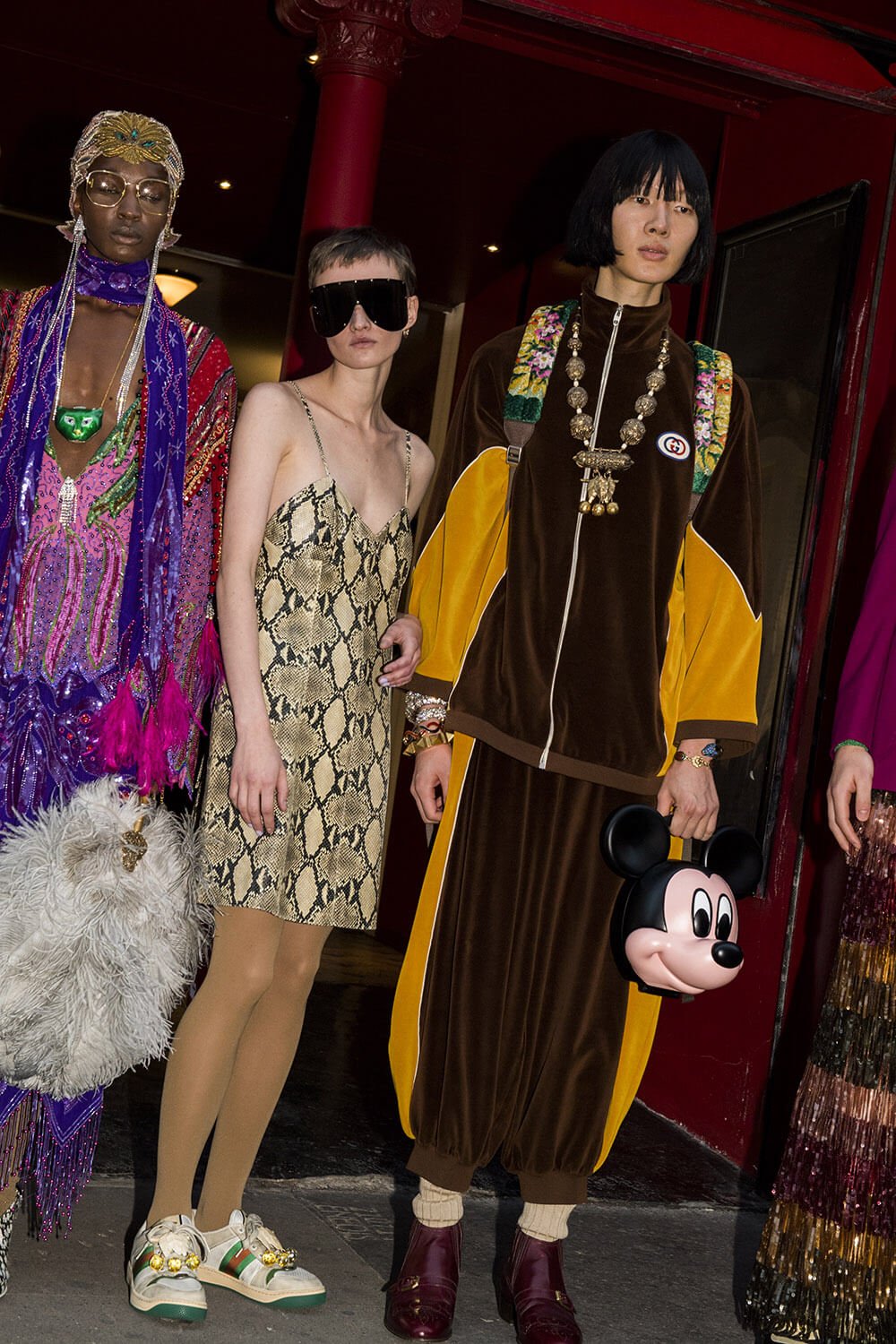 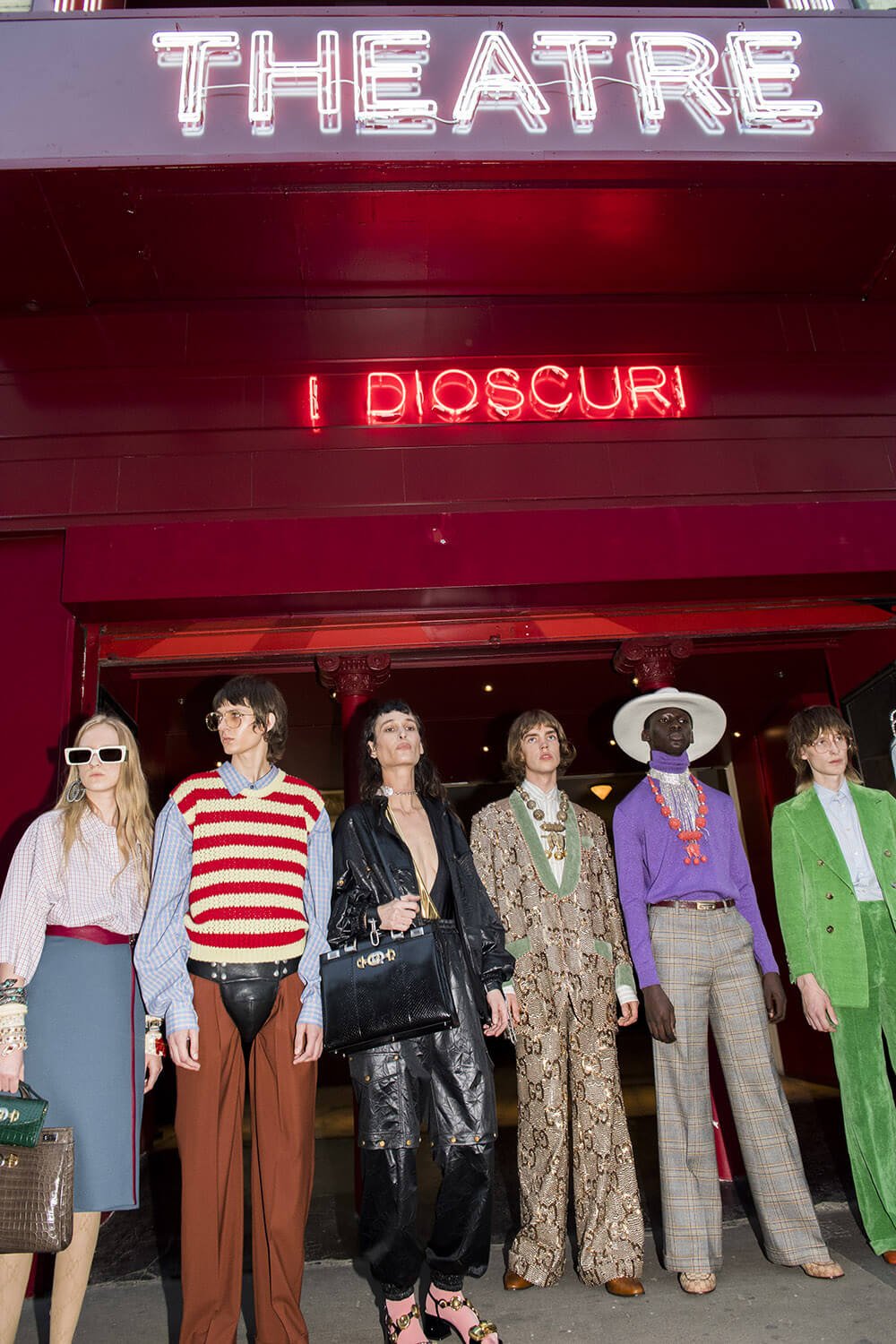 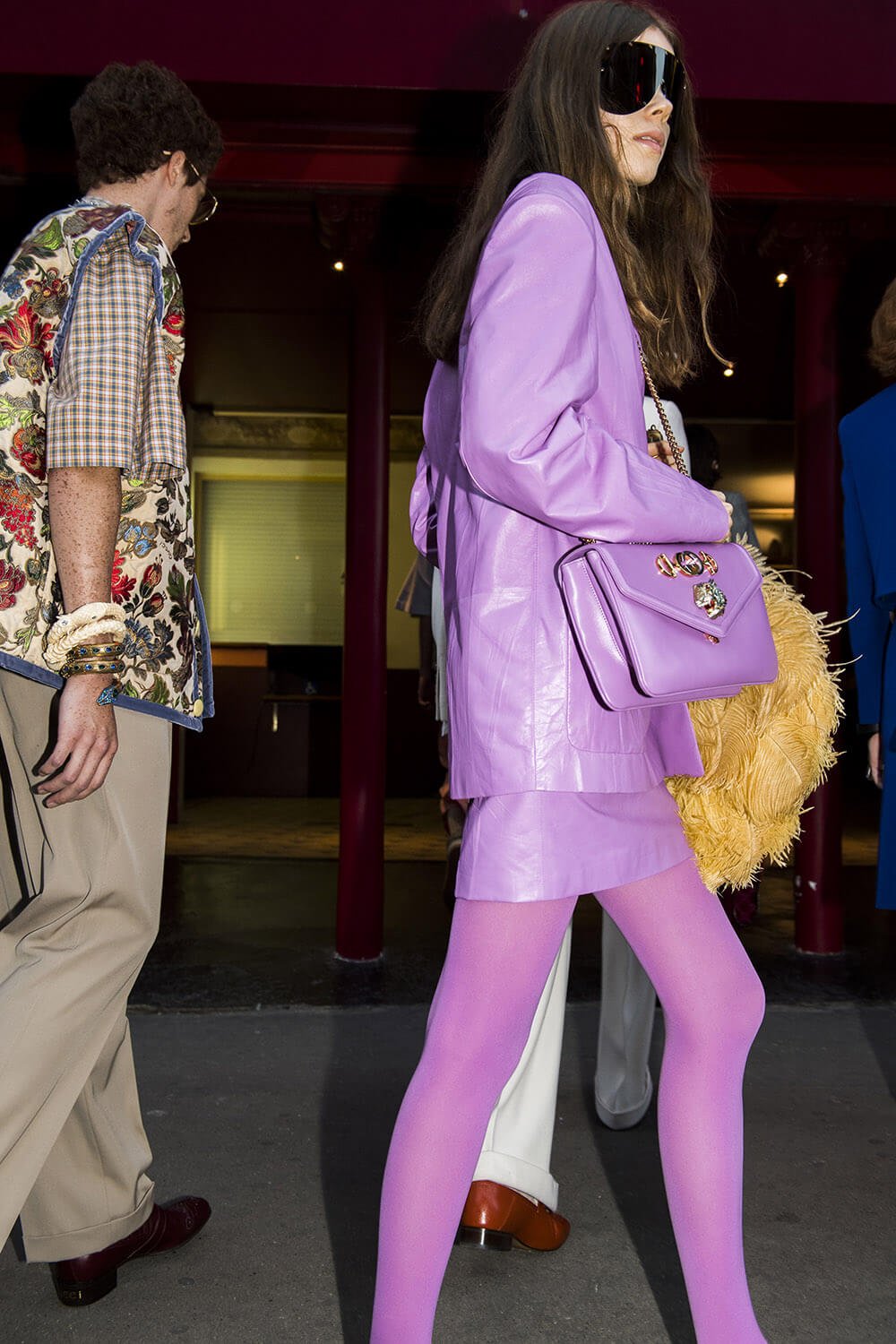 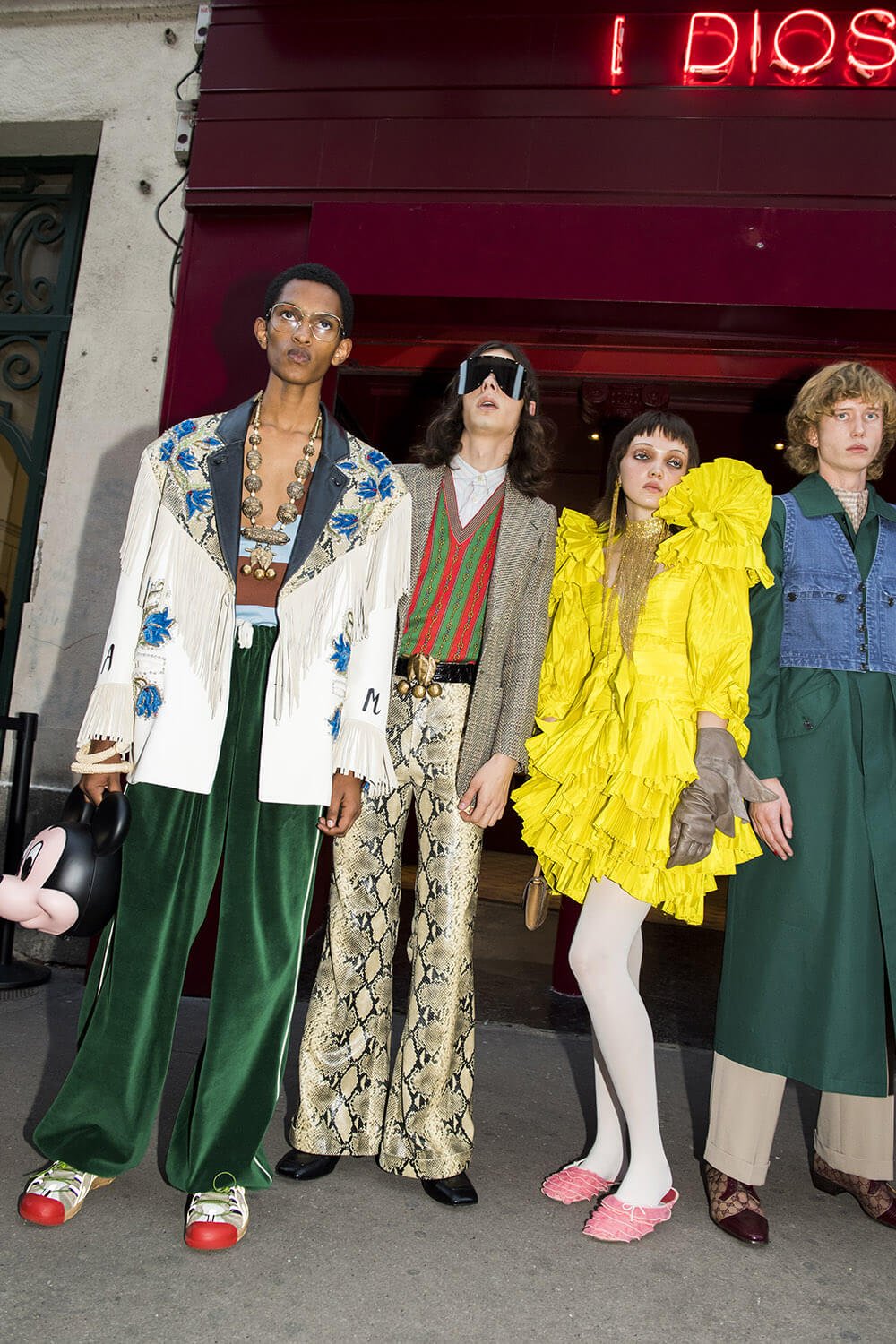 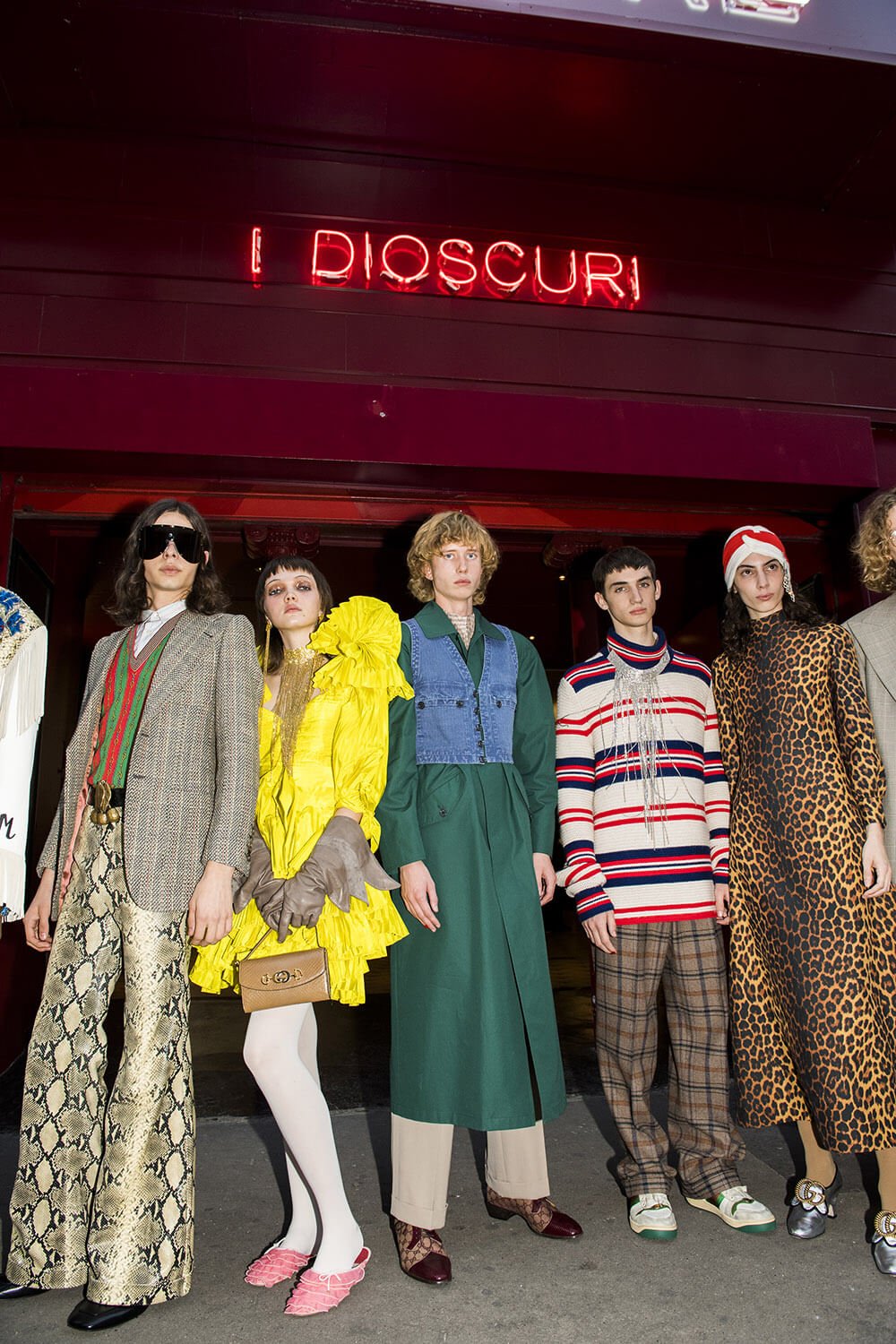 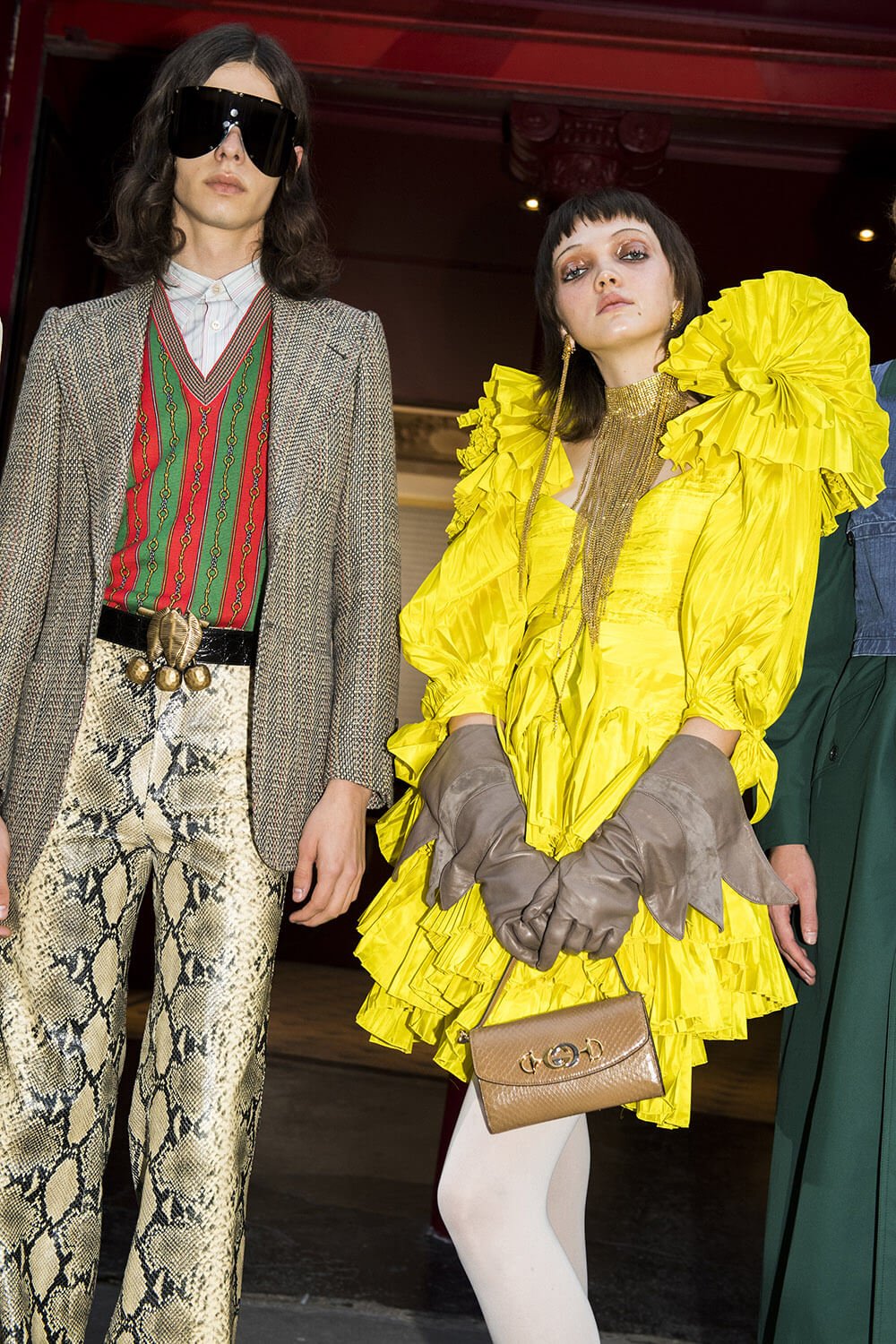 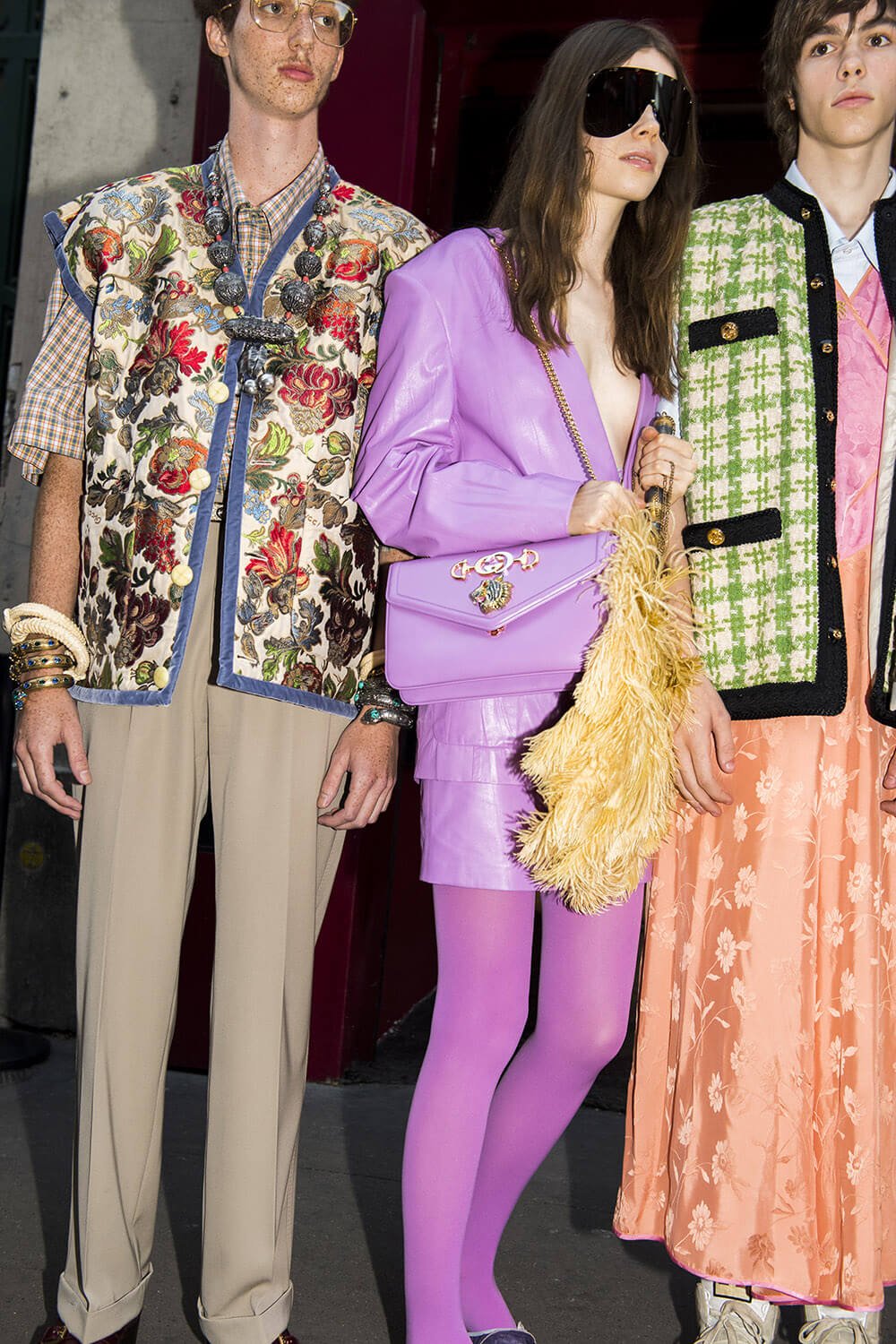 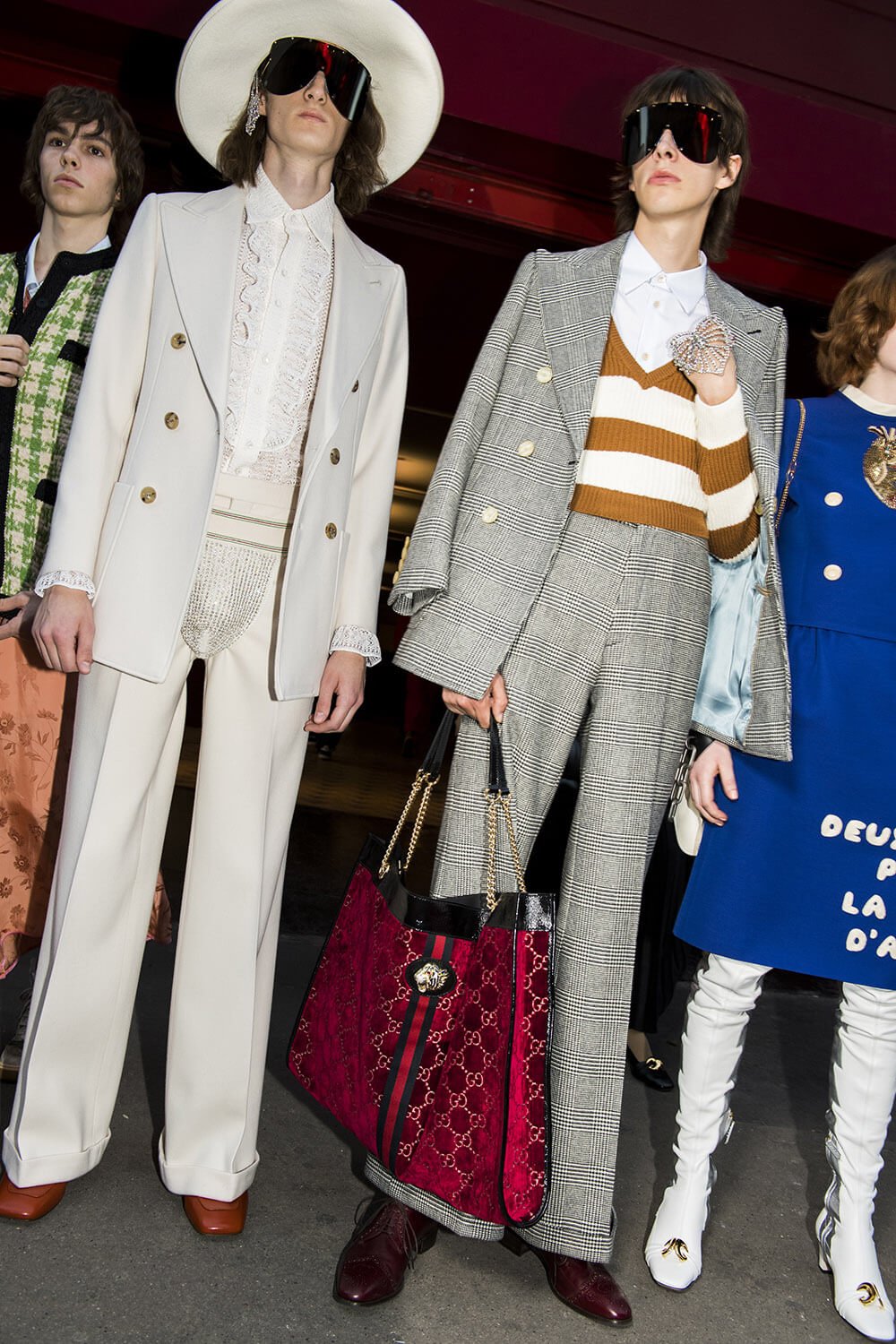 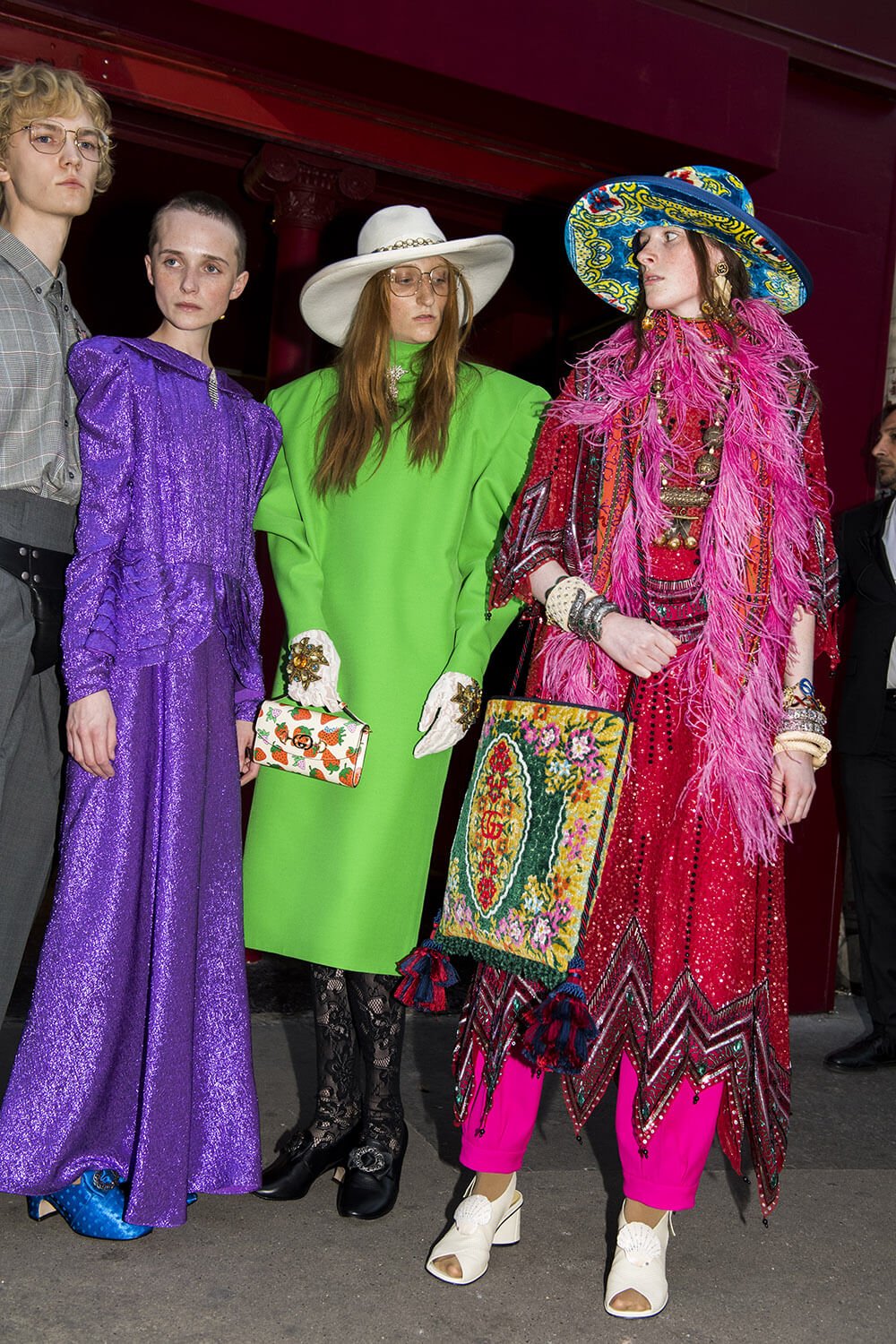 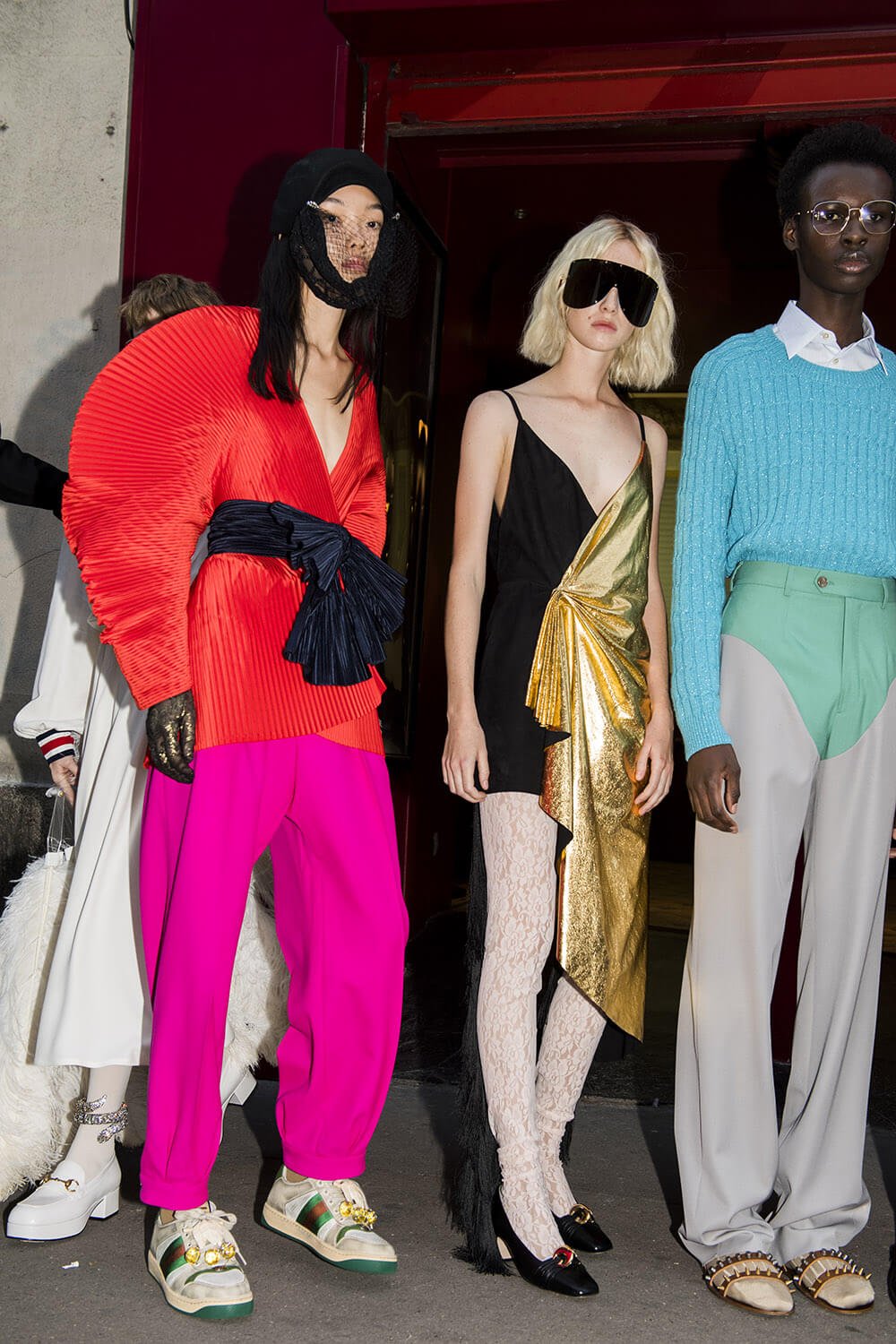 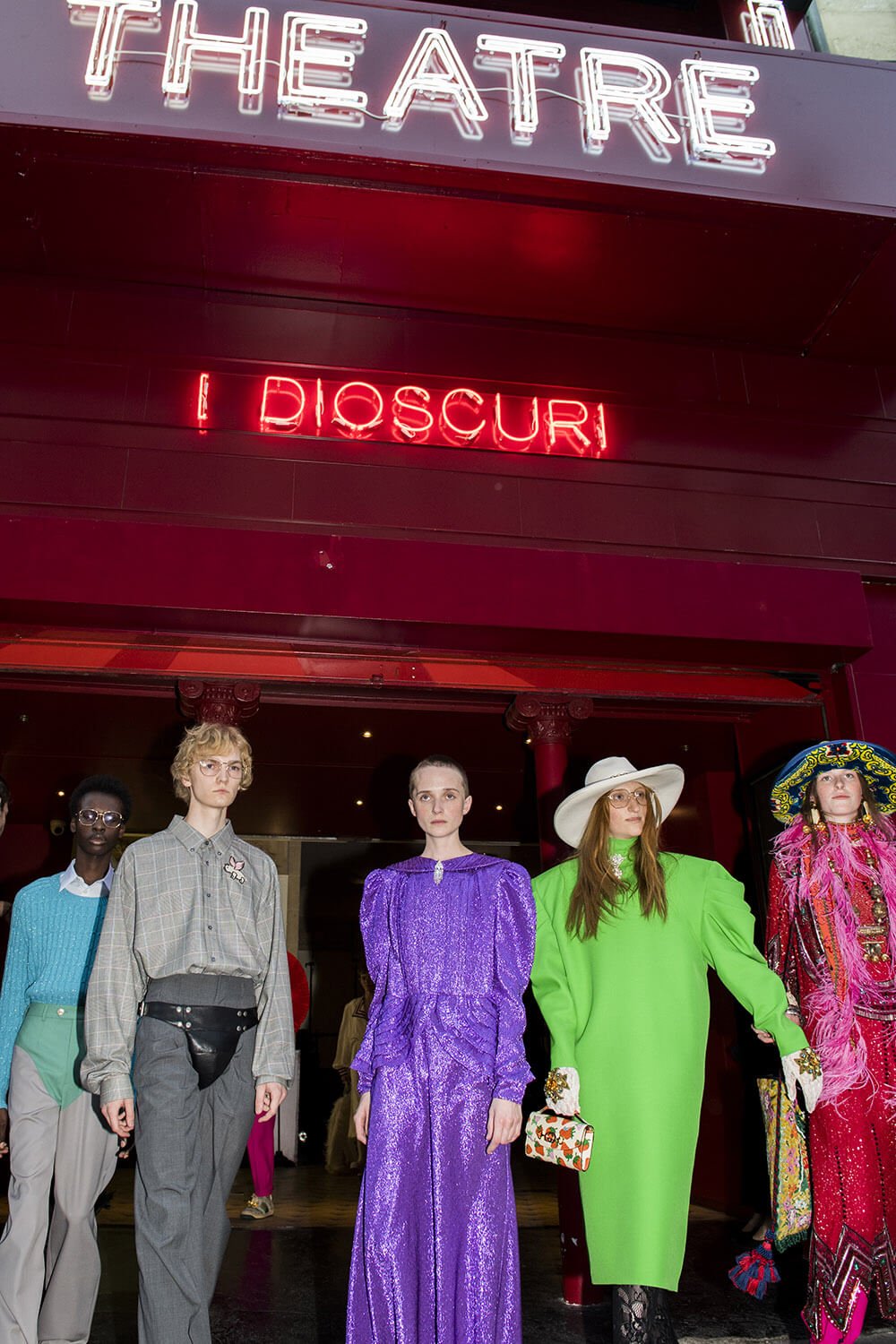 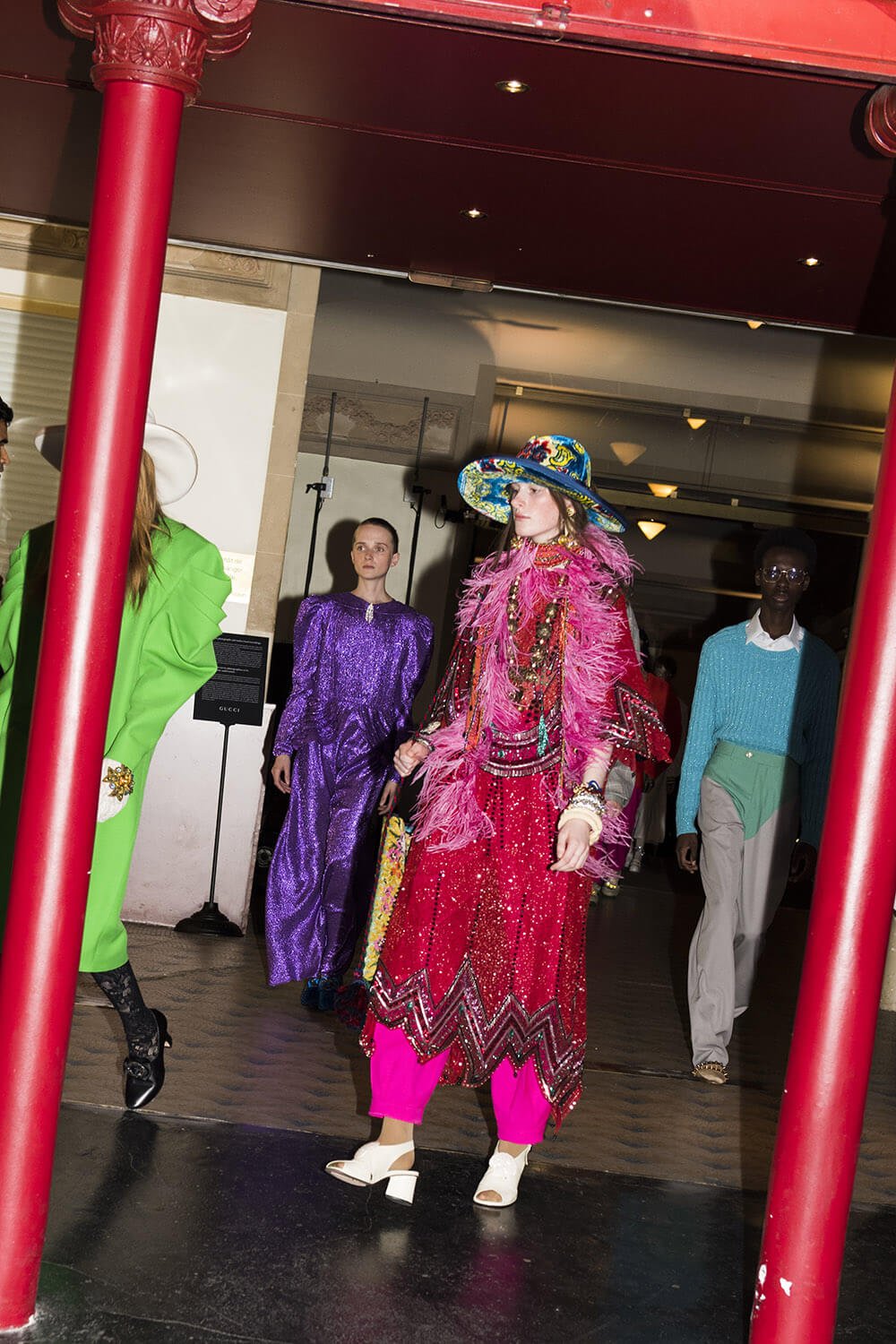 If these wall could speak…. For one night only, Italian mega brand Gucci transplanted itself from Milan to Paris. Guests filed into the famous Le Palace venue. These days its a theatre but back in the Eighties, it was the hottest nightclub in Paris and the wild, nocturnal hang out of the likes of Grace Jones, Mick and Jerry, Yves Saint Laurent and Prince. Anything went at Le Palace, as long as it was fabulous, glamorous, surprising, weird, sequin splattered and risqué. Does that also sound like a recipe for a Gucci show? You bet. Designer Alessandro Michele  watched from the dress circle as his show got started. First, a film – vintage experimental footage from the “most decadent and experimental” protagonists of 1960’s experimental theatre, Leo de Berardinis and Perla Peragallo. Strange, disturbing, costumed in lamé and filmed with a pre-Kira Kira spangle,
it set the scene perfectly.

Michele’s Gucci models came out two by two, walking though the theatre stalls before climbing onto the stage and standing in solemn formation. There were boys in lounge lizard suits accessorised with bedazzled cod pieces (if anyone can resurrect this as a trend it’s Michele) and girls in floppy hats and sequin finery. One yellow cocktail dress exploded with architectural frills, another shimmied with luscious, blue beaded fringing. Gender fluid boys wore tea dresses under frumpy cardigans and one girl took to the stage in a black leather shell-suit.

This time last year, Michele paid tribute to Elton John. For this collection, he painted the back of a jacket with Dolly Parton’s face. Half way through, Jane Birkin, stood up from her seat in the stalls and began singing a torch song. Row upon row of models stood in line until the dimly lit stage was full. What struck home, in the nightclub gloom was the dazzling individuality and eccentricity of each person on the stage. Each one was stand-out. Yet the thing that connected them was the wild imagination of Alessandro Michele and the glorious Gucciverse he has created.

Inside 10: Creative Director, Nicola Formichetti, Is Our Next Inductee To Ten Men At Home

10 Times Fashion Went To The Pub

10 Questions with Tommy Cash, As He Releases His New EP ‘Moneysutra’

This is How Vivienne Westwood Celebrated her 80th Birthday